Editors note: this is week 4 of our recurring feature from a young family point of view as they visit all of Georgia’s state parks. I’ll include links to the previous weeks action at the end.

Welcome back to our little state park adventure! It’s a rainy April here in Georgia, nearly every day this week was pouring- so today I am going to throwback to one of the first State Parks we went to as a family: Sweetwater Creek State Park. This park has become a popular spot because the ruins of an old textile mill featured on the red hiking trail was also a film location for the Hunger Games. The park itself runs along the large and flowing Sweetwater Creek for which the park is named. The park boasts history, beautiful hiking trails, amenities, and even a spot for weddings! 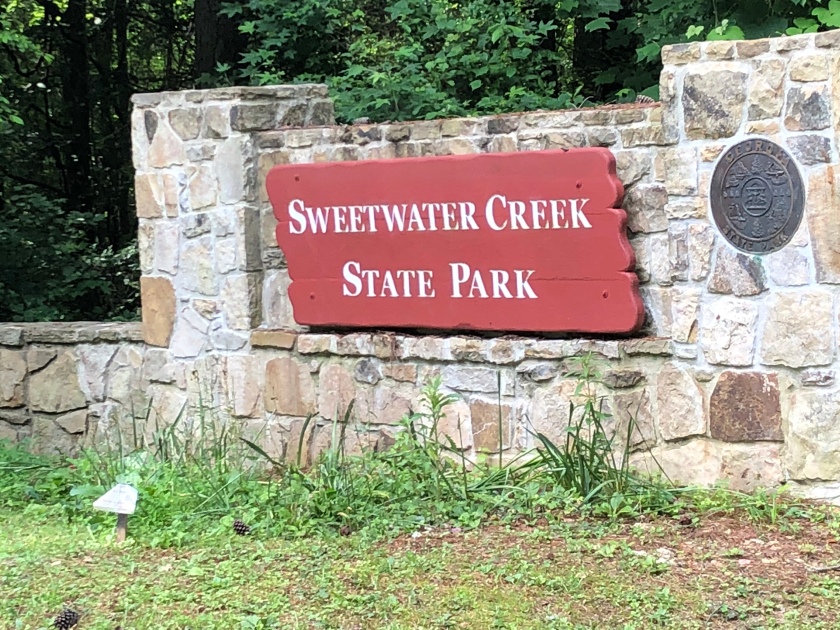 Upon arriving at the park, we were very surprised at the sheer amount of people there. It was challenging to even find a place to park our car in the large dirt lots. After locating a parking spot, we headed to the most popular trail, the red trail, to check out the ruins of the New Manchester Manufacturing Company, a textile mill that was burned during the Civil War. Upon beginning the trail, I started to wonder if we should have chosen a different one. It was quite literally just a flat dirt path for the first bit, people with flip-flops and strollers were heading down alongside us- not a great sign when you are looking for a fun hike. The trail remained just as easy but got a little more exciting when we were able to walk right alongside the creek. Our son enjoyed watching the flowing stream and looking for creatures along the edge. We quickly arrived at the old ruins, which were nice, but you are unable to get very close due to preservation.

Just as I was thinking that the park was a crowded bust, we saw a sign that was our saving grace. Just past the mill, it reads “the red trail now becomes moderately difficult.” Apparently that scared all the flip-floppers away because 95% of the crowd did not continue on the trail past that. In my opinion, “moderately difficult” trails can actually be more fun with kids than easy ones, because the child stays interested with the challenge of climbing. That was definitely true in this case. The trail got really fun after the ruins. It became very rocky, and had some wooden stairs at the steepest parts. We hiked for about a mile along the rocky trail, holding on to the chains they had inserted into the rocks for balance. We ended up turning around after we became soaked in mud (I would recommend going on a dry day), but the rest of the trail looked equally fun and exciting.

What started out as a slight disappointment due to crowds ended up being a really enjoyable hike that I would love to do again. If I could give some recommendations for Sweetwater Creek, they would be to: go on a weekday to try to beat the crowds, go when it’s dry outside because the creek side trail does get pretty muddy, and to keep going past the old ruins to see what the red trail really has to offer! Thanks for reading and let’s hope all these April showers bring some May flowers (and hikes).