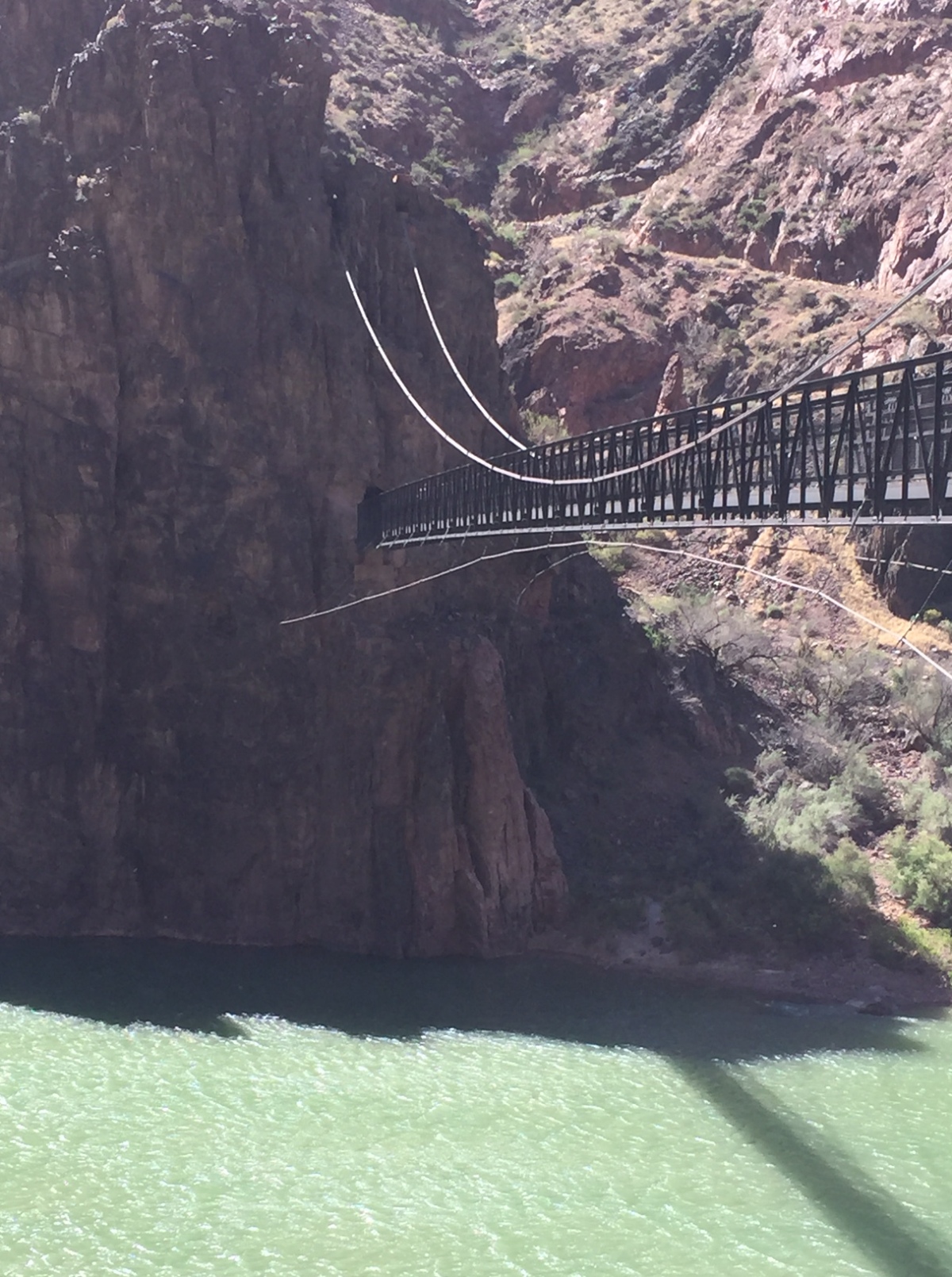 The sky was vivid blue and clear.   I could feel a nip in the air as I was dressed lightly in anticipation of hotter temperatures in the day.   My son Josh and I were packed and ready to descend into the canyon.   Which canyon?… the Grand Canyon of course.   The first time I visited the Grand Canyon, I had wanted to go down to the Colorado River.   Josh shared that dream with me and so we booked plane tickets from Atlanta to Phoenix.   Since we were unable to get a permit to camp in the inner canyon, we planned to hike from top to bottom and back up again in one day.   This is highly discouraged by the National Park Service and I would never recommend it in the heat of the summer.

Our hike was scheduled for late April (2016).   Our plan was sound and we were prepared.   At 7am, we headed down from the South Kaibab trailhead.   It was 36*F.   We both had backpacks loaded down with an excessive amount of water, high protein granola bars, peanut butter crackers, trail mix and an unfortunately large bag of dried apricots.    I was a little nervous.  I was in pretty good shape for 43, but could I keep up with my 18 year old son and the 13 miles of switchbacks back up the Bright Angel Trail?   My excitement and the easy start to the descent quickly made me forget about any anxiousness I may have had.   We marveled at the colors of the rock walls and the amount of blooming flowers.   6 miles and 2 ½” hours later we arrived at the Colorado River.   It is a very dramatic entrance as you go through a tunnel blasted through the rock face and cross a bridge that is somehow affixed to the rock wall on the south side of the river and leads to the north side of the Colorado River.   Our packs were much lighter having constantly chugged water and munching on our snacks on the way down.

We refilled our water bottles there at the bottom knowing the hike back up would be much harder.  Along the trail running parallel to the river, we found a picnic table in the shade to rest and prepare lunch.   The temperature at the bottom was a scorching 91*F.   We finished up our lunch and I was surprised to see that I had eaten almost the entire bag of apricots on the way down.   I went ahead and finished it off.   After spending a brief 30-45 minutes soaking up the views and watching a very tame deer, we were ready to head back up.   The unknown was a little scary at this point.  I figured that it might start getting dark in the canyon by maybe 4 or 5pm as the sun was blocked by the canyon walls and I was unsure how long it would take to climb back up to the top.

The first part of the ascent of Bright Angel was pretty easy as it followed the river for a ways before taking a sharp turn up through a pass and leading us back up the cliff face.   As we proceeded, the apricots started to make themselves known in my gut.   I quickly realized my mistake in consuming the large bag of apricots and I was struggling with stomach cramps as we ascended the trail.   We passed a beautiful small waterfall but I couldn’t stop to enjoy it as the apricots were causing me severe discomfort.  I was in desperation mode when suddenly we turned a corner and found ourselves already at Indian Garden.   Indian Garden is natural oasis with running water, trees and most importantly, bathroom facilities.   Crude facilities to be sure, but I never was more happy to see a hole in the ground.   After a rest in the cool shade, we resumed our journey and the more steep inclines.   Several hours and many a stomach cramp later, we turned the last switchback and crested the top of the trail.   My legs were like jelly and I was exhausted.   Josh looked like he could do the trail again.   Ah, to be young and strong again.

I must say I was proud to have done the hike in the time we had completed it.   8 ½ hours to complete 15 ¾ miles with 8000 feet of elevation change and a lifetime of memories to share with my son.   I would recommend this hike for everyone…..just leave the dried apricots at home.