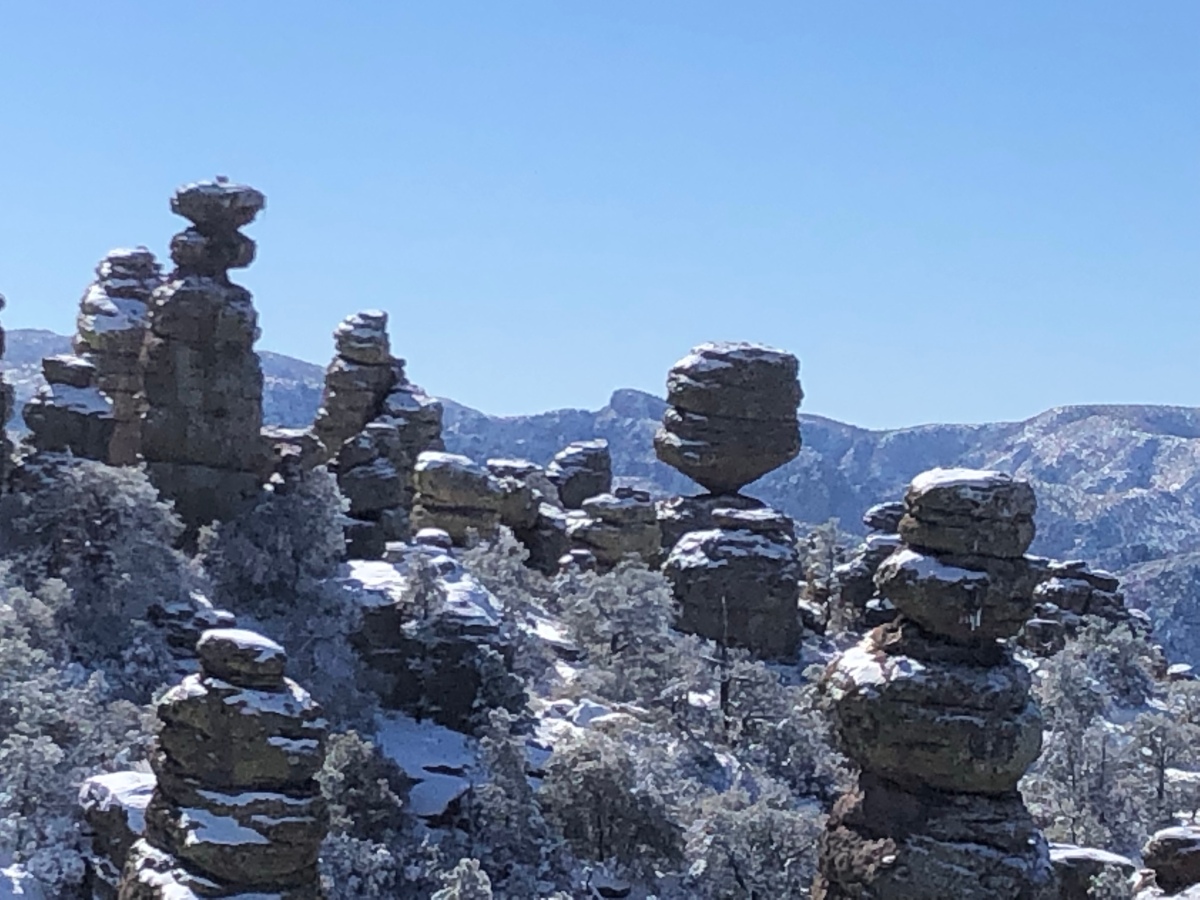 I was a little shocked to see this much snow just 70 miles north of the Mexican border in Chiricahua National Monument. I pictured southern Arizona a little differently. Hiking in the 8″-10″ of snow under a cloudless blue sky was magical though and I wouldn’t have had it any other way. I hope you enjoy the pictures. rk 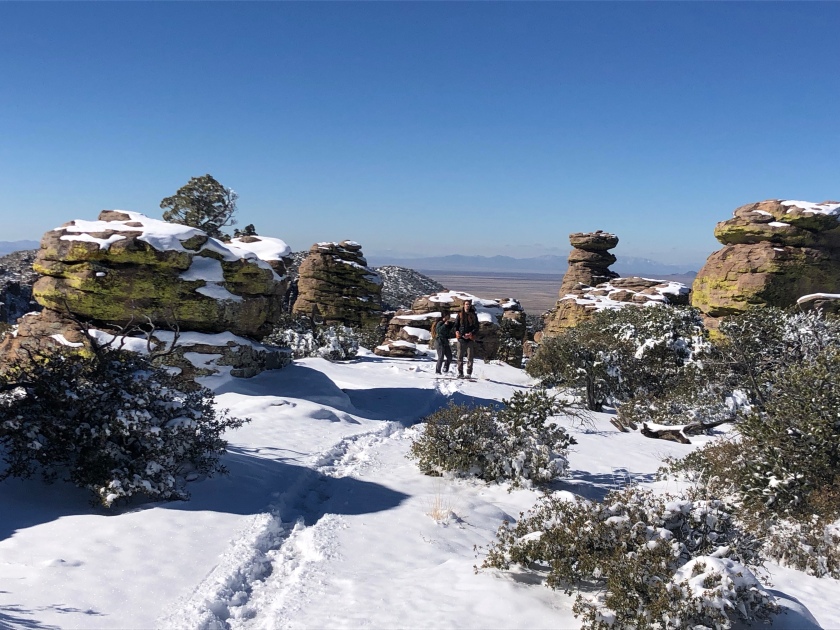 Chiricahua National Monument in southeast Arizona is a real gem. I had a free day in the area and wanted to see as much of this park as possible including the Heart of Rocks Loop. This remote part of the park is only accessible by hiking several other trails. I mapped out a route beginning at the Echo Canyon trailhead, but taking the Ed Riggs Trail to Mushroom Rock Trail, up and back Inspiration Point Trail, and then down Big Balanced Rock Trail to the Heart of Rocks Loop, then down the Sarah Deming Trail, up the Upper Rhyolite Trail connecting to the Echo Canyon Trail back to where I began. This route is 9.5 miles total. 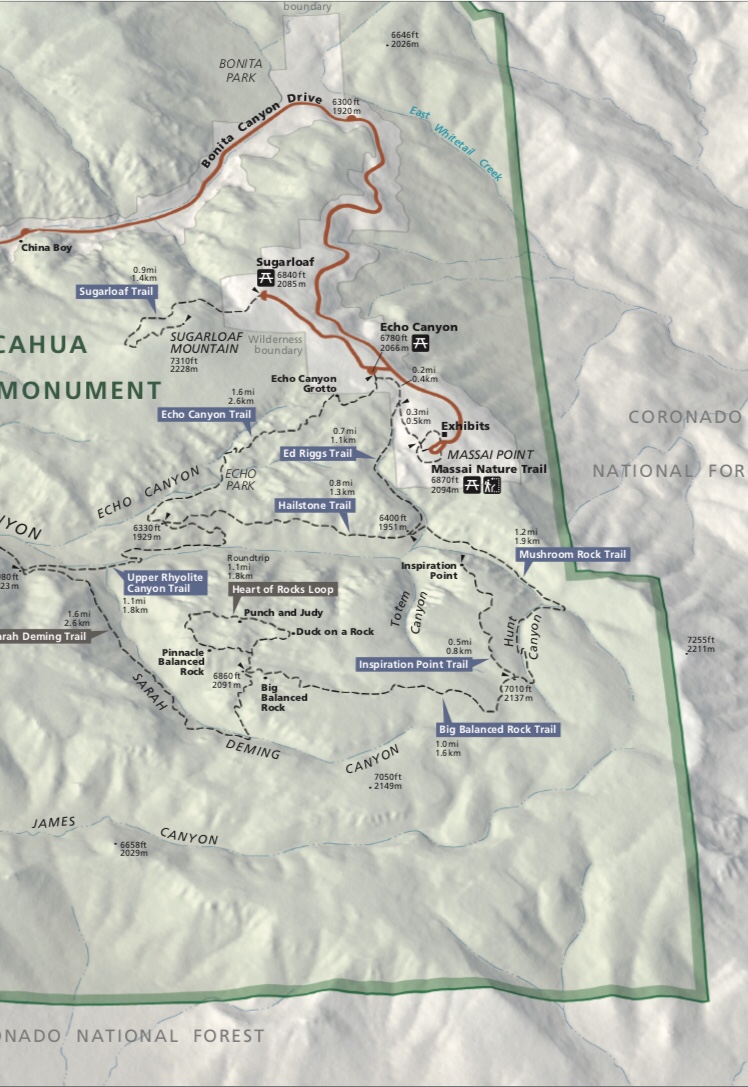 Chiricahua National Monument is known for its balanced rocks, spires and hoodoos formed by eroding volcanic rhyolite rock. I was excited to see this but I had no idea that there were probably millions of this features. Certainly more than you could count.

After packing my bag with lots of water and snacks, I took the quick connector trail from the Echo Canyon Trailhead to the Ed Riggs Trail. I snapped some shots of some standing rocks that I would have just strolled by later without barely noticing because of their commonness. 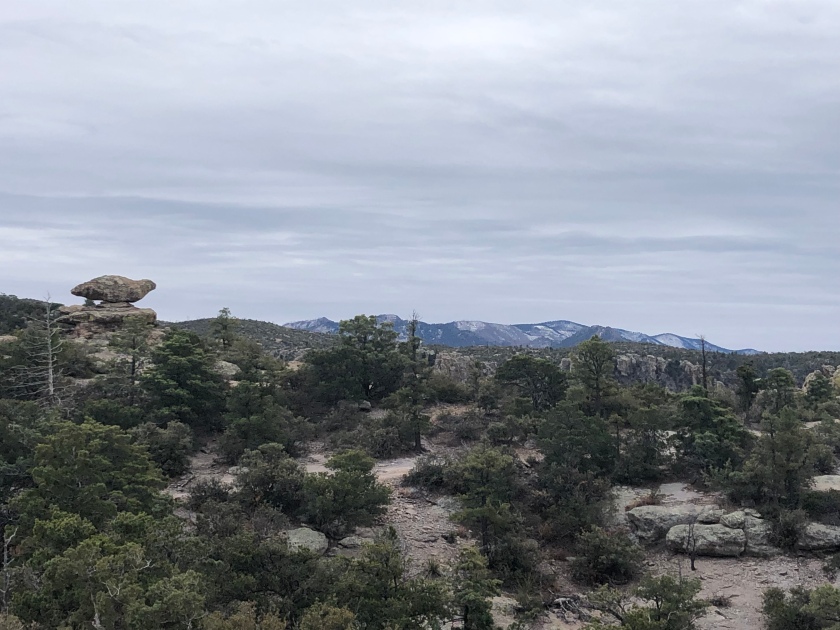 I scooted down the Ed Riggs Trail in record time because my adrenaline was pumping. The features on this trail were stunning but would pale to some of the rock formations later to be seen. 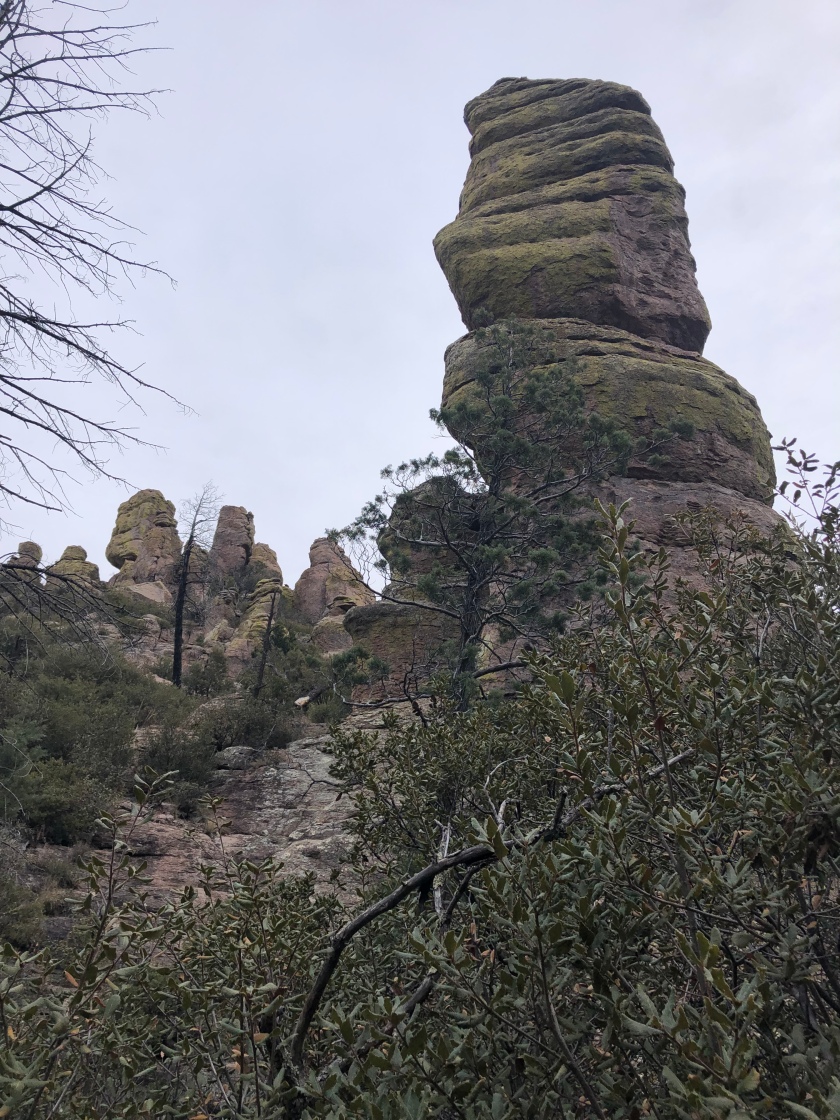 Quicker than I could believe I cut down the Mushroom Rock Trail. This trail had some incline in it that slowed me down a bit. The namesake Mushroom Rock looked more like an inverted triangle to me. I don’t understand how it doesn’t fall over. After passing Mushroom Rock you could see that this area had been affected by wildfires sometime recently. 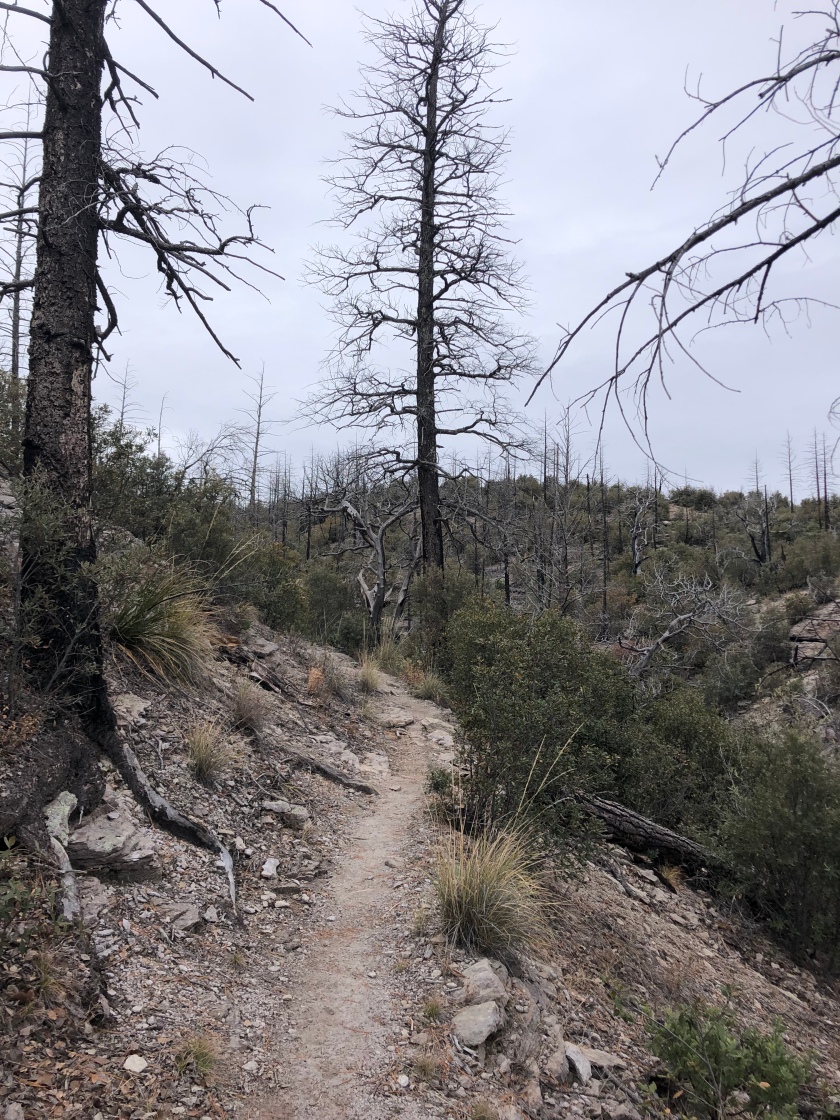 Inspiration Point is a 1 mile out and back spur trail. It is the highest part of the park at just over 7000 ft elevation. I was really surprised by the view at Inspiration Point. It views right down the valley and out of the park to the flat ground outside. I climbed up on a rock, had a snack and soaked in the amazing view. You can see how prevalent the rock formations really are in the picture. 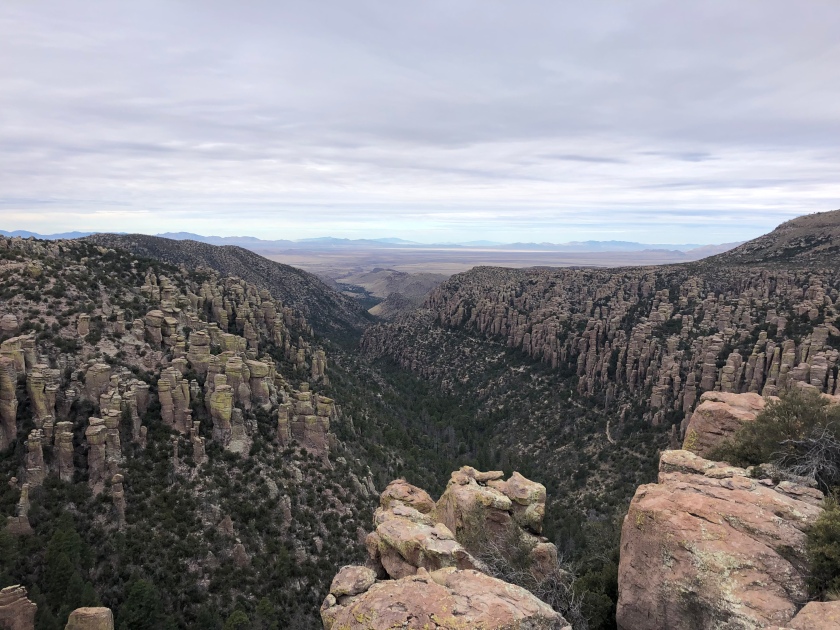 I returned back to the main trail and resumed by going down Big Balanced Rock Trail. After a while I saw this big balanced rock and took a bunch of pictures because it was so amazing. Turned out it was just some unnamed but still cool rock feature. 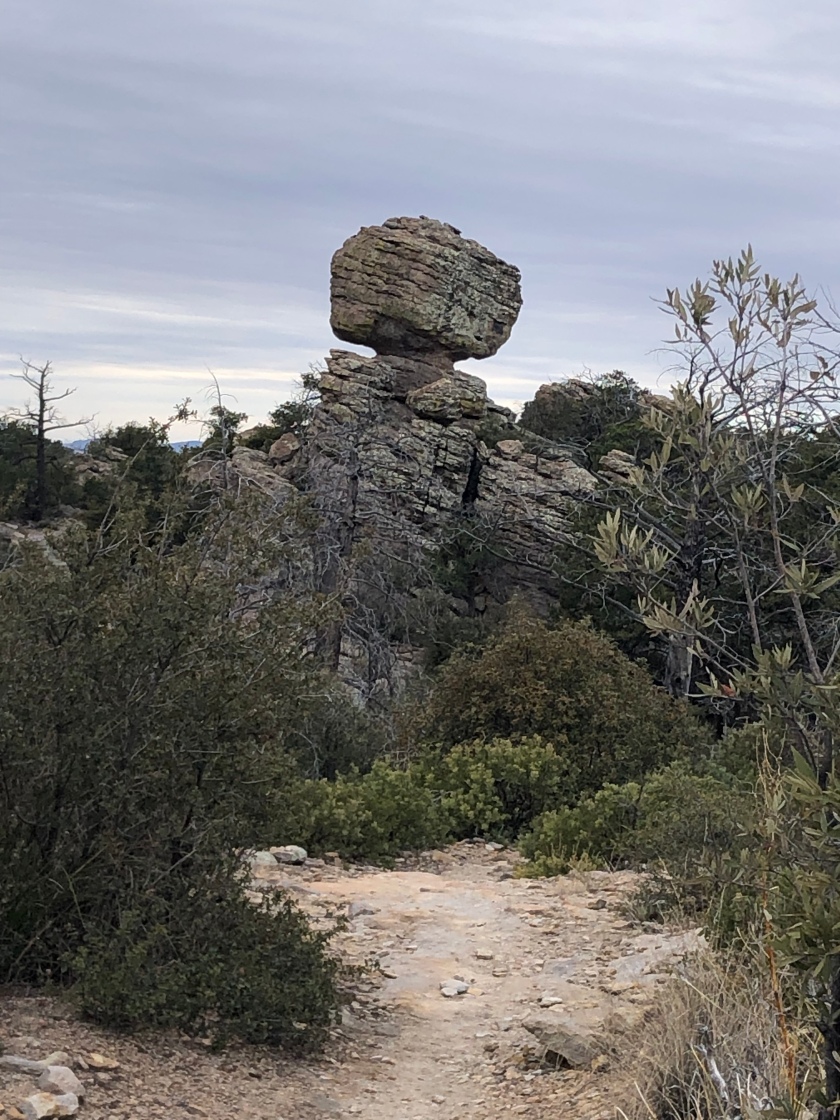 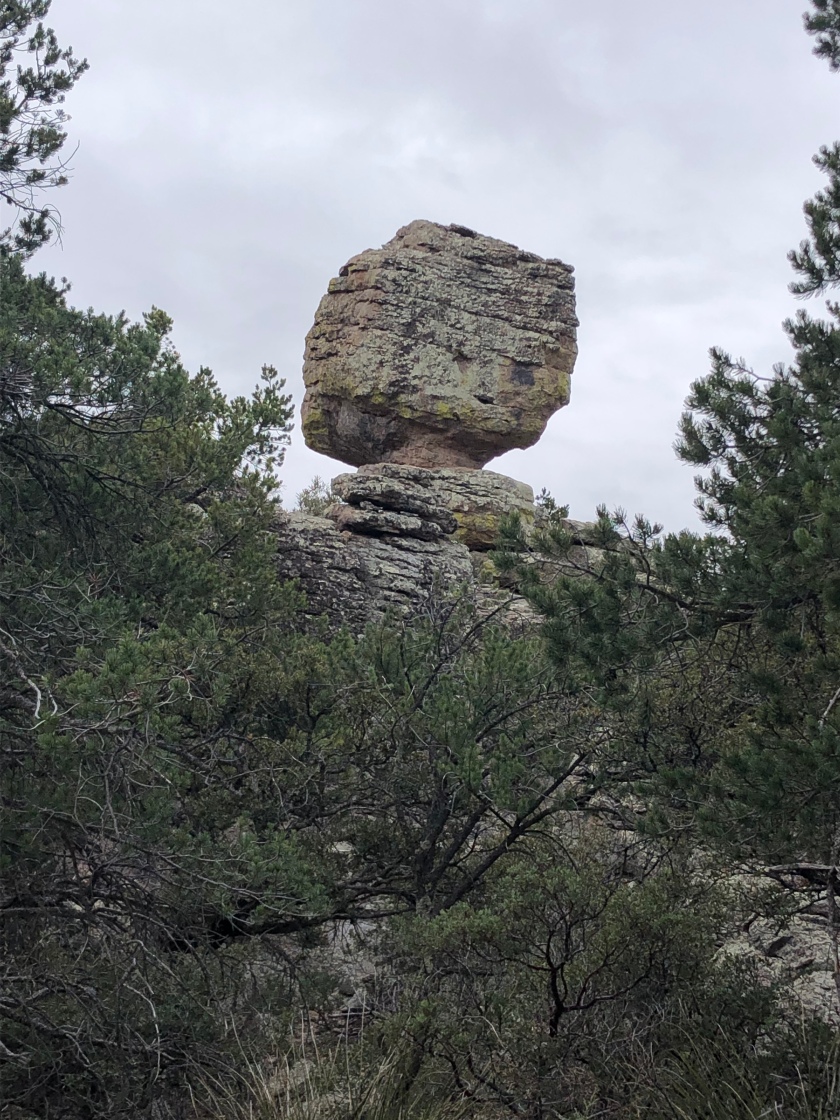 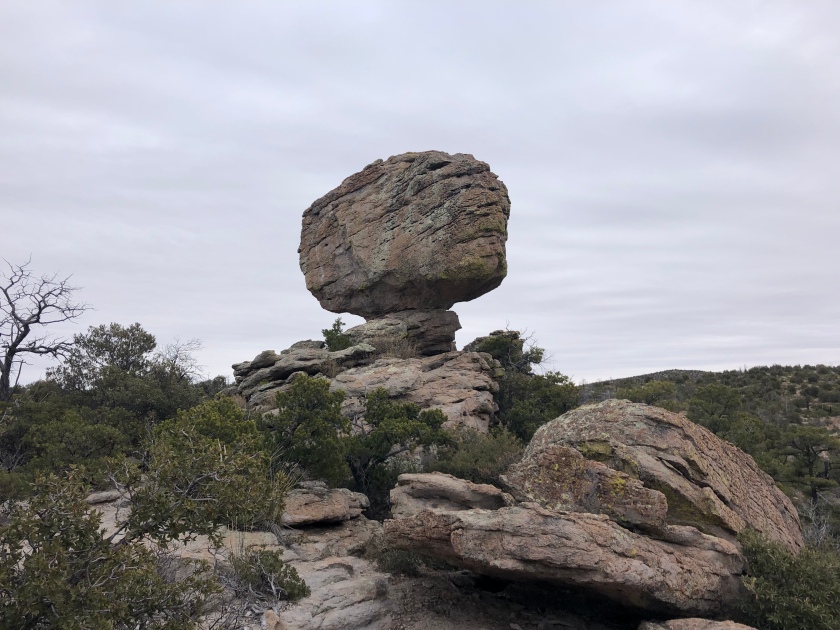 The real Big Balanced Rock defied gravity and for scale look at the specifications on the sign. 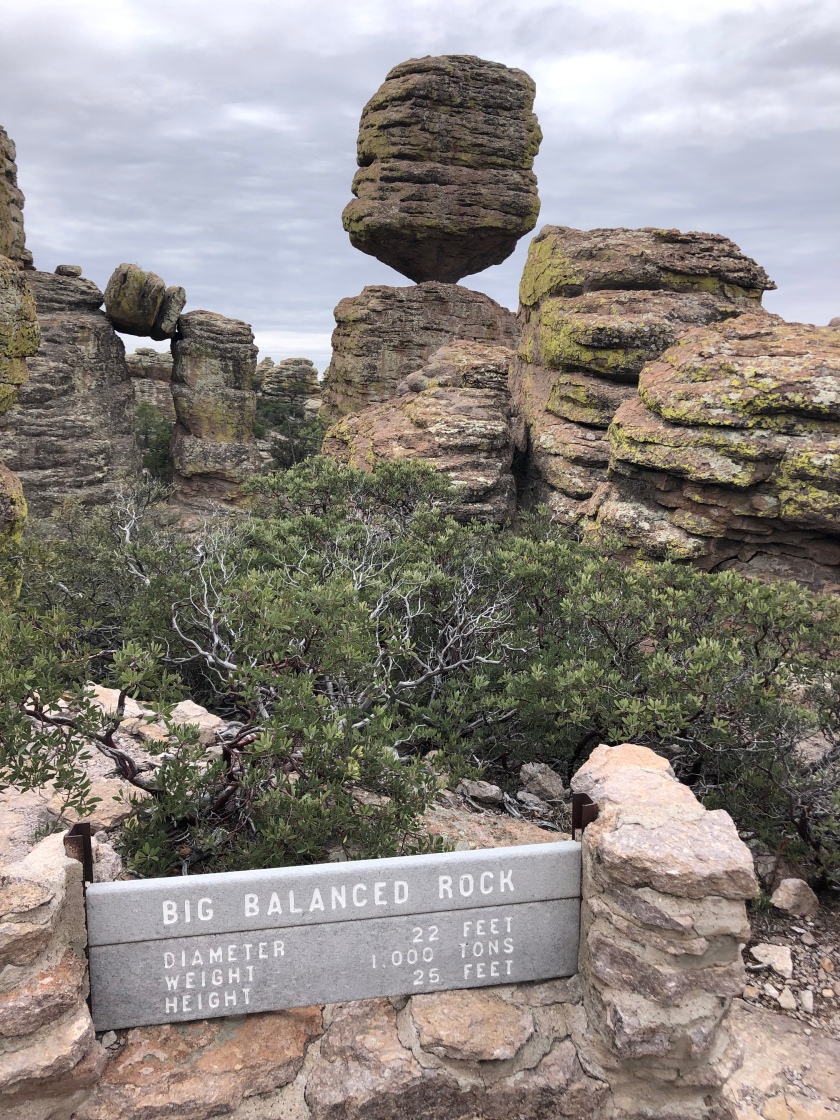 From here I took the Heart of Rocks Loop. This was really fun as parts were a rock scramble and you felt really in with the rocks. The Pinnacle Balanced Rock was my favorite in this area. 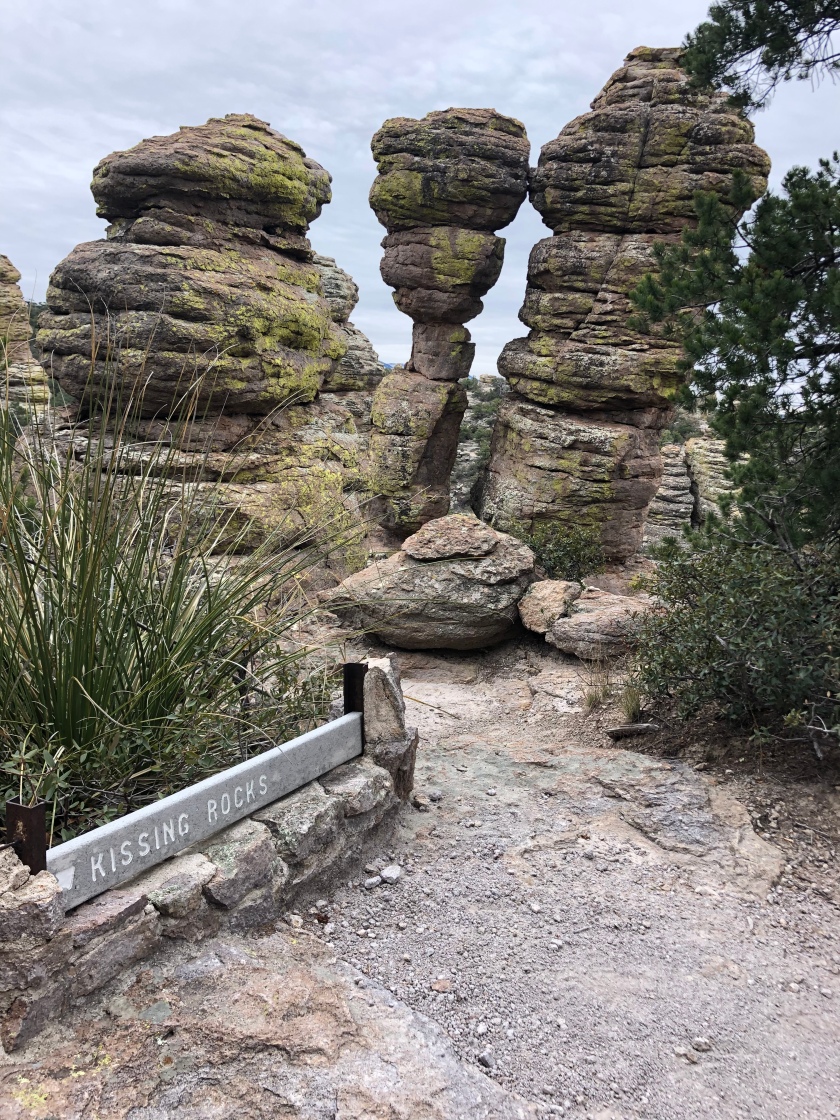 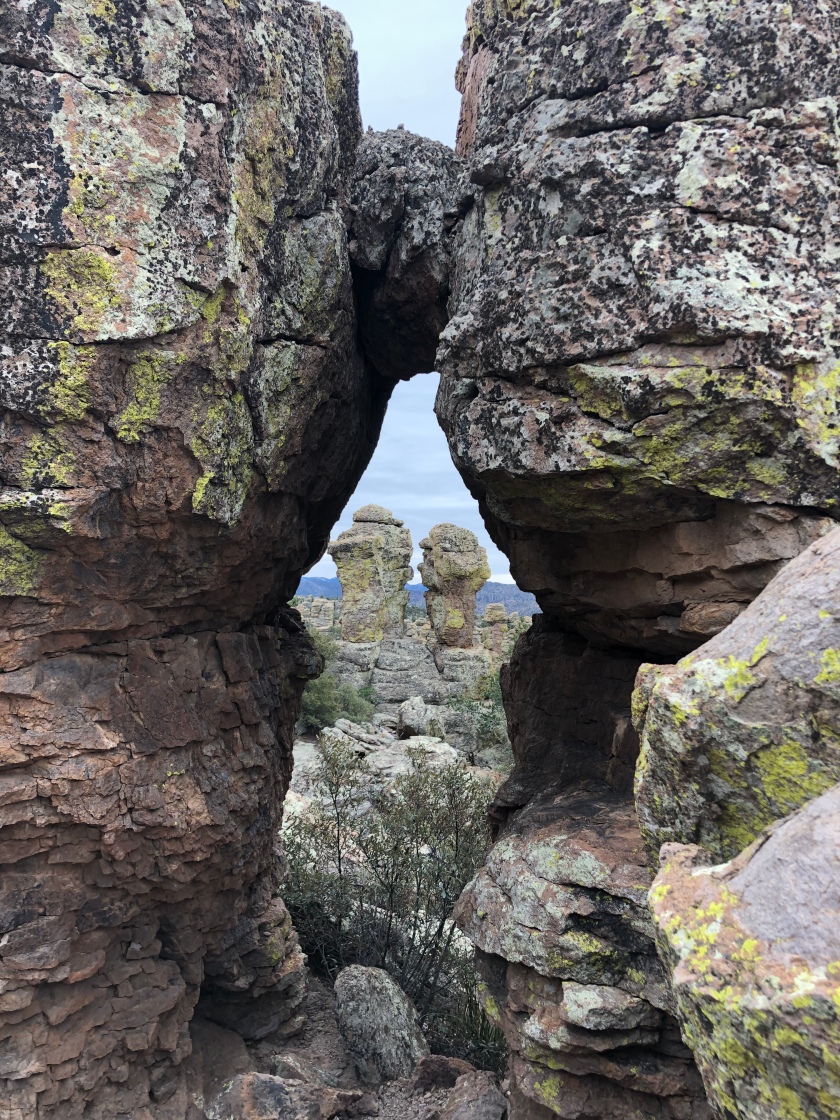 After completing the loop I continued down the Sarah Deming Trail. This trail went down the entire time losing much elevation. It was also much more wooded. 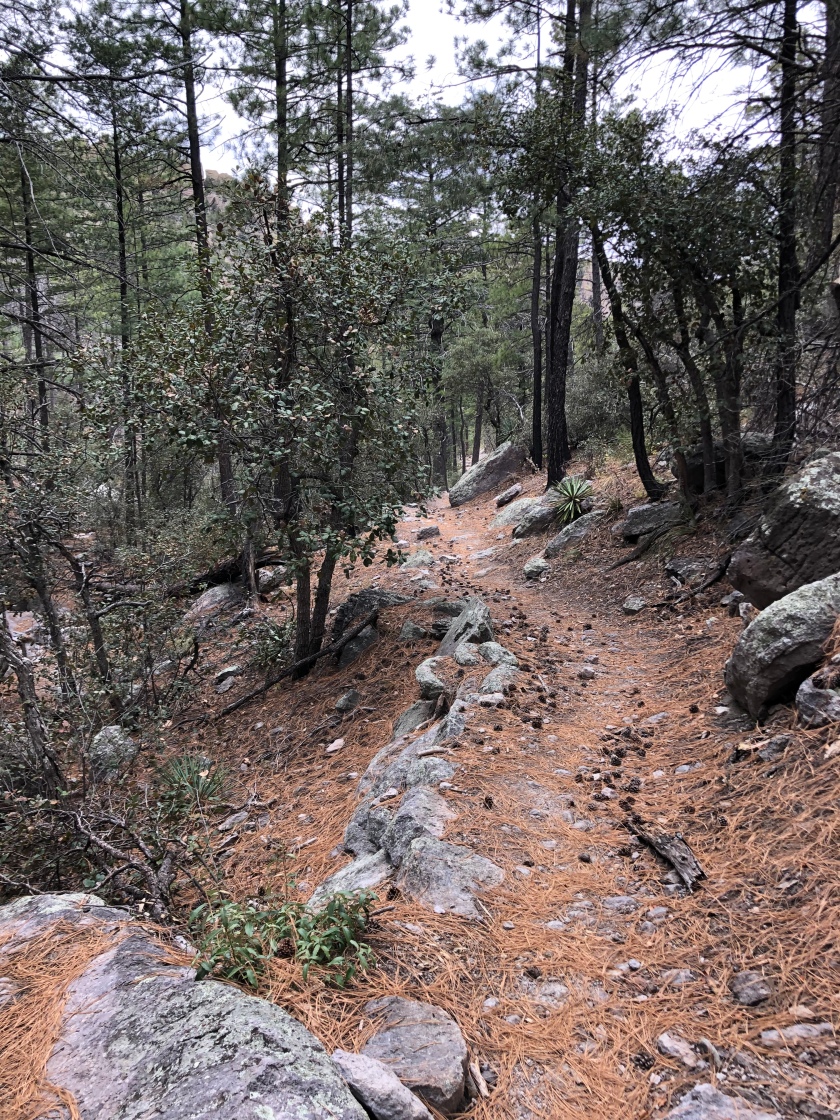 From here I connected onto the Upper Rhyolite Trail which crossed the valley floor including over a rocky wash and started to go up the far side where it joined with the Echo Canyon Trail. 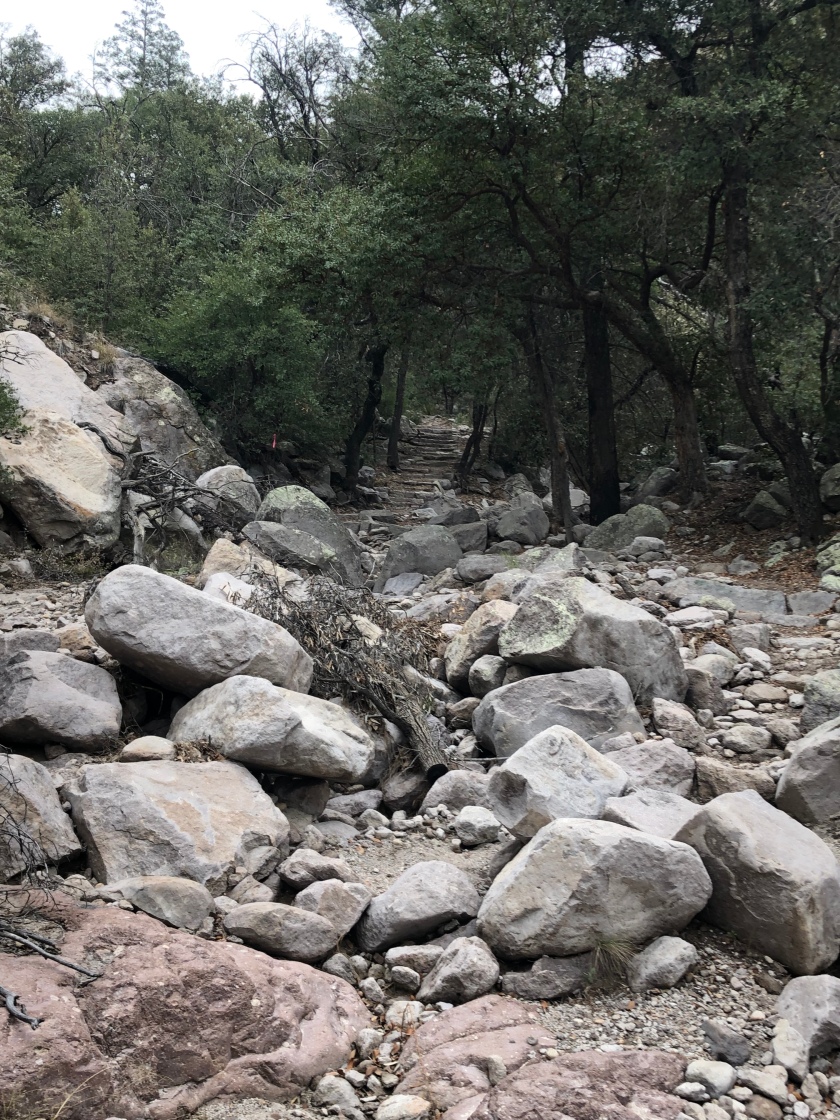 Echo Canyon was the last portion of the hike but it may have been the best (aside from going up, up and more up). It had many of the same cool rock formations but also some slot canyons and rock caves to pass through. It was on this trail where I saw the first and only people I would see while hiking in the park. 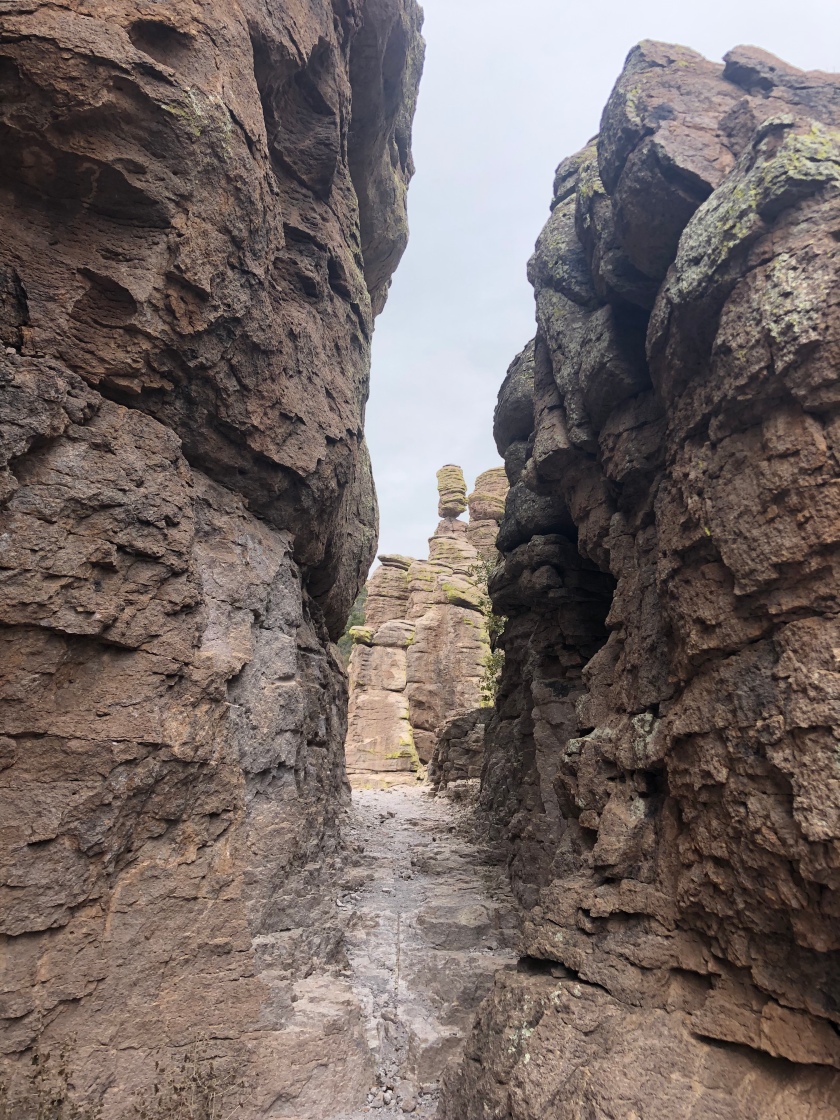 I made it to the parking lot exhausted but thrilled and happy. I cannot tell you enough how amazing this National Monument is. If you like hiking and exploring then add Chiricahua to your bucket list now. Thanks for reading. rk