The Alkali Flat Trail in White Sands National Park was different than any hiking trail I’ve ever done before. It’s a 5 mile loop trail through the seemingly neverending sand dunes. It’s also unusual as most hikers are carrying plastic sleds as well.

The trail follows from one marker to another where you can walk up a sand dune and then sled down the other side. Eventually you get the the far end where you can see the Alkali flights along with the adjacent White Sands Missile Range in the distance. 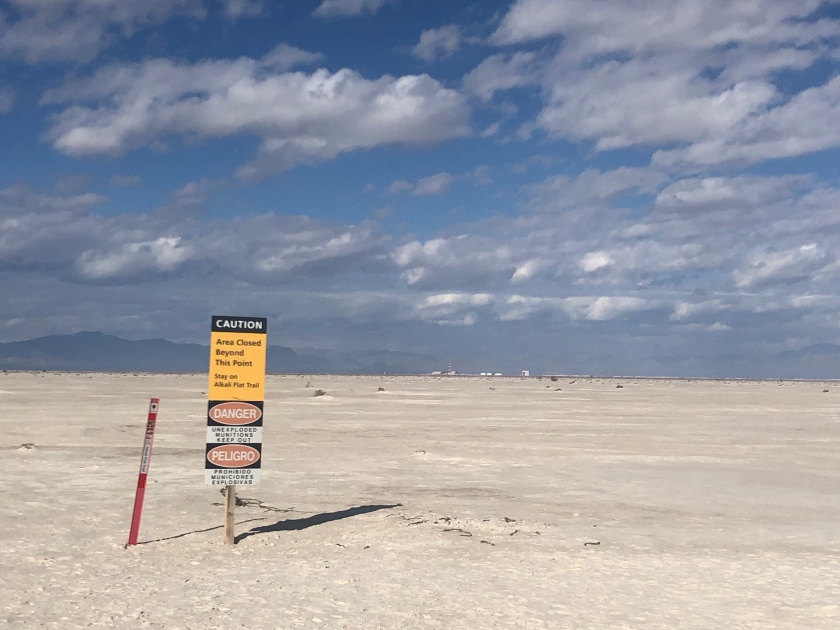 This hike is really unusual but also amazing with mountains off in the distance surrounding you as you navigate the sand dunes. This is the definite White Sands hike you must do when visiting our newest National Park.

Sandia Peak rises 5,000 feet above Albuquerque, New Mexico and well into spring can have snow atop the peak. The views are incredible and despite being a popular weekend spot you can often find the peak void of people on weekday mornings.

The Inscription Trail is a half mile paved loop trail in New Mexico’s El Morro National Monument. Half a mile wouldn’t usually take somebody 30 minutes to walk but if a park ranger hands you a hefty book with a couple paragraphs for each of the twenty something stops along the trail it’ll probably take you a while. And that’s what happened to me as I arrived just before the park closed it’s gates to day hikers. With my bible sized pamphlet about the rock inscriptions I started the trail to learn all about the history of El Morro. In a nutshell what I learned is that because of a year round watering hole at the base of El Morro’s sandstone cliffs, the area became a vital stopping point for people traveling west in the vast New Mexico desert (just like the first Love’s Truck Stop in New Mexico is to me after driving 18 hours from Georgia).

Anyways because of the sandstone’s easy markability many early graffiti artists made their mark in El Morro. Beginning with early Native Americans and continuing through the ages past Spanish explorers, pioneers of the Wild West, the infamous Don Juan, and up to miner 49ers. Since El Morro was made a National Monument in 1906 marking up the ancient walls is off limits but the history of people writing “[Blank] Waz Here” will be immortalized by this national monument. 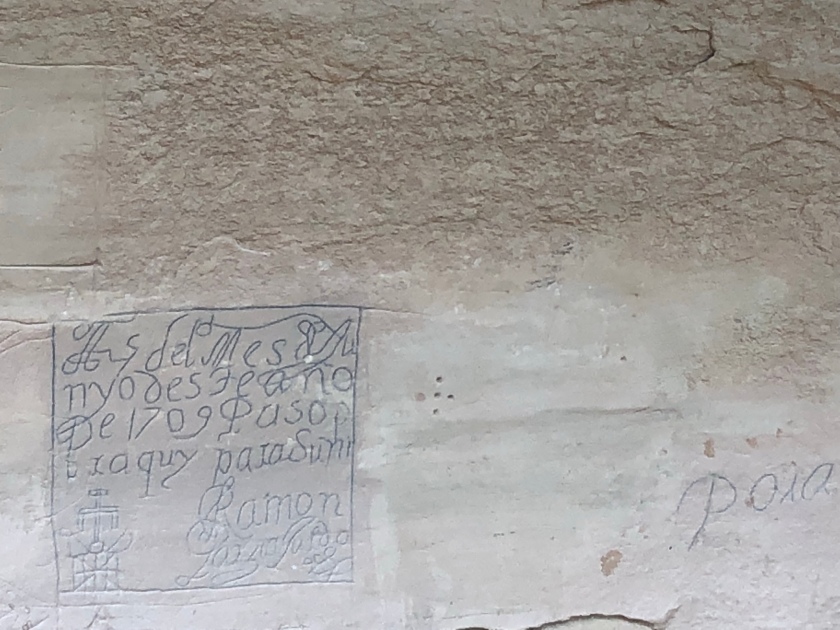 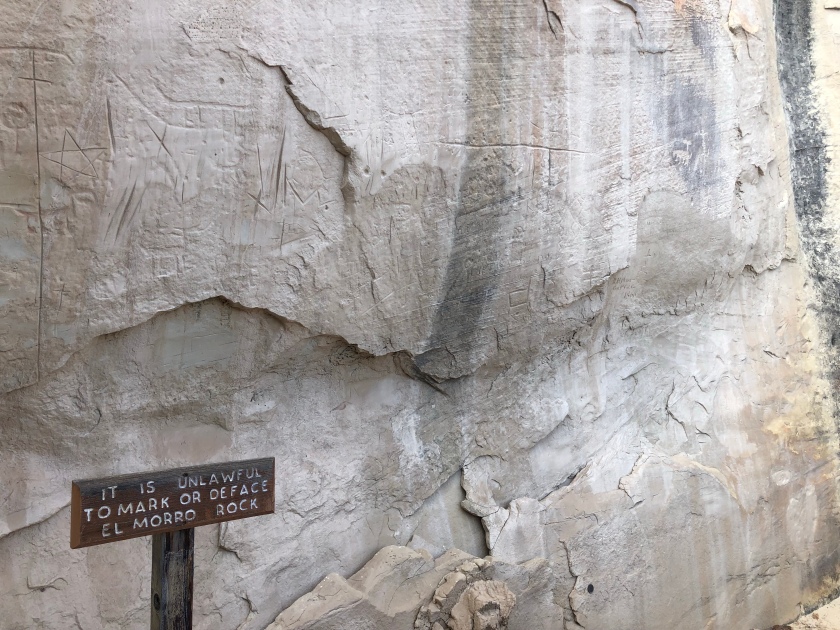 My favorite inscription was a Native American depiction of some bighorn sheep!

The Forks Campground in New Mexico’s Gila National Forest is great for many reasons. The first being that it is free. Who doesn’t love free? It’s location just off of highway 15 makes it the perfect location when visiting the nearby Gila Cliff Dwellings. The views aren’t bad either as the campground is next to a very cool canyon formed by the West Fork Gila River. Once the sun goes down and you can’t see down into the canyon anymore then you can look up as the stars come out in the millions. The Gila is one of the darkest places in the contiguous United States so unless there are clouds you’ll be stargazing all night at this campground. 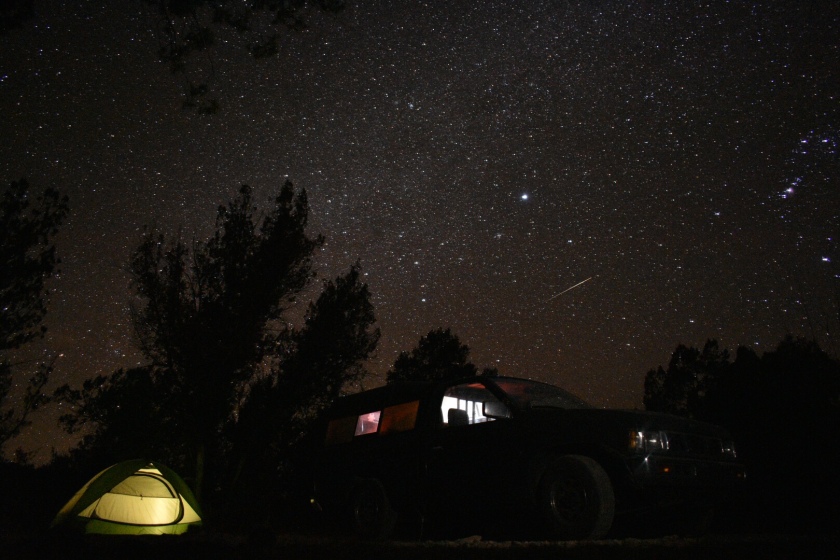 The only downside to the campground is the lack of potable water so be sure to bring enough water for your camping trip! (You can hike down to the river quite easily if you are in dire need of water but be sure to boil it before consuming!) 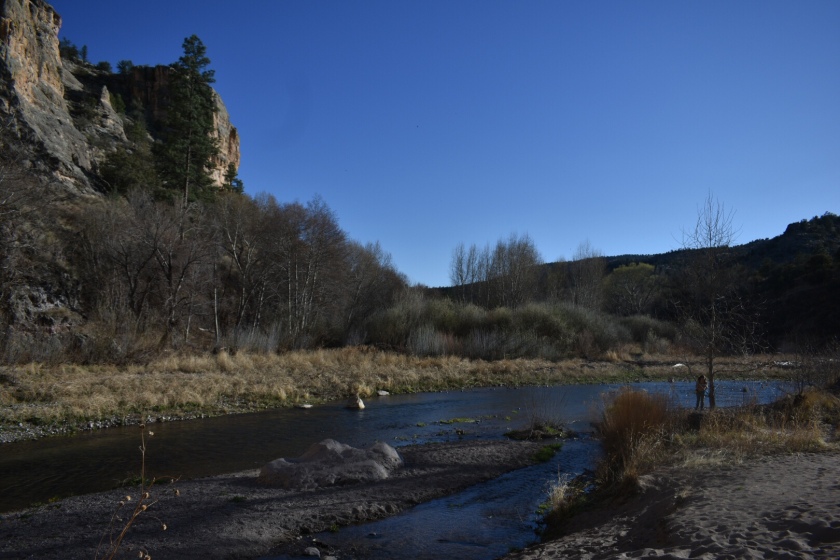 There are vault toilets that are fairly well maintained by the forest service and a large fire pit in the center of the campground if you want to have a party. I prefer to find a nice secluded site and hang out by the fire though. Whatever you do here though I’m sure it’ll be a great time!

PS. Be sure to check the fire hazards for the national forest. As a native New Mexican, Smokey the Bear wouldn’t be too happy if you started a wildfire in his home state. 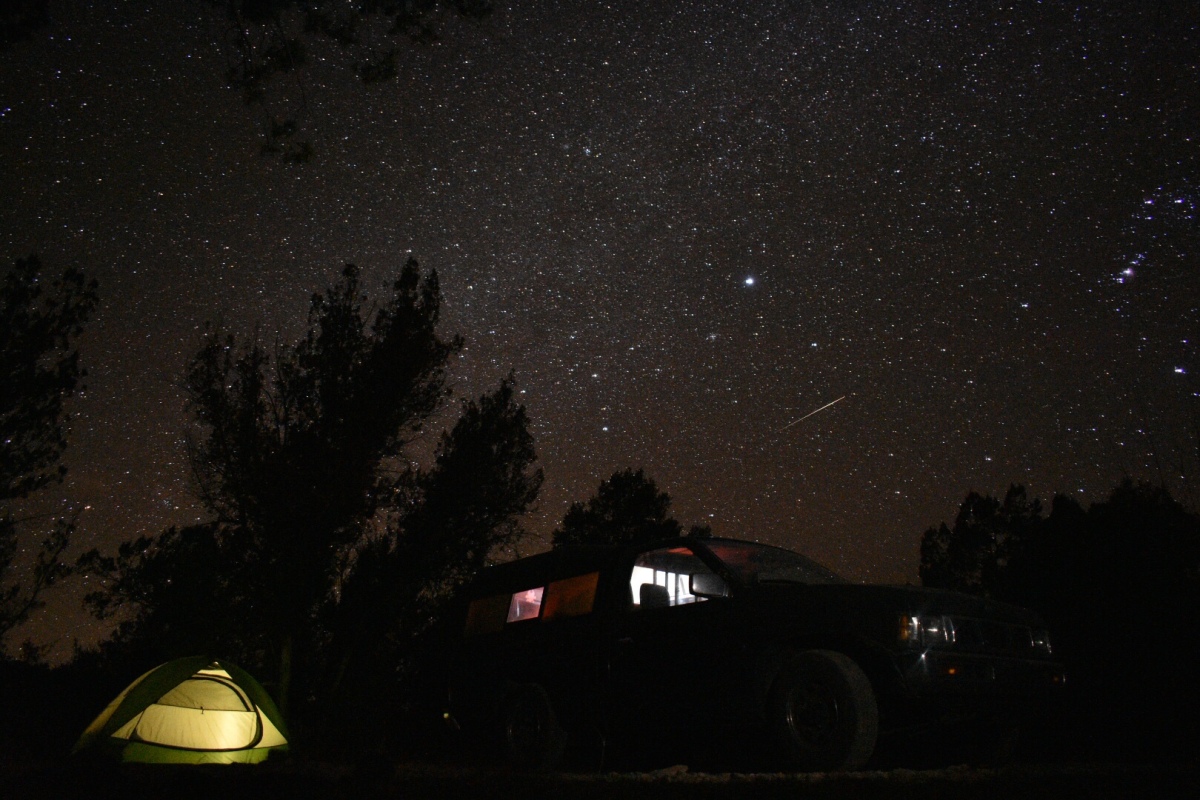 I took this picture in early April from my campsite in the Gila National Forest of southwest New Mexico. The stars were beautiful that night and I’m really glad I got a good picture of them to remember! I hope this encourages you to get out and go see some stars for your own! The new moon will be tomorrow night (the 12th) so go find a dark area near you and stargaze a little! 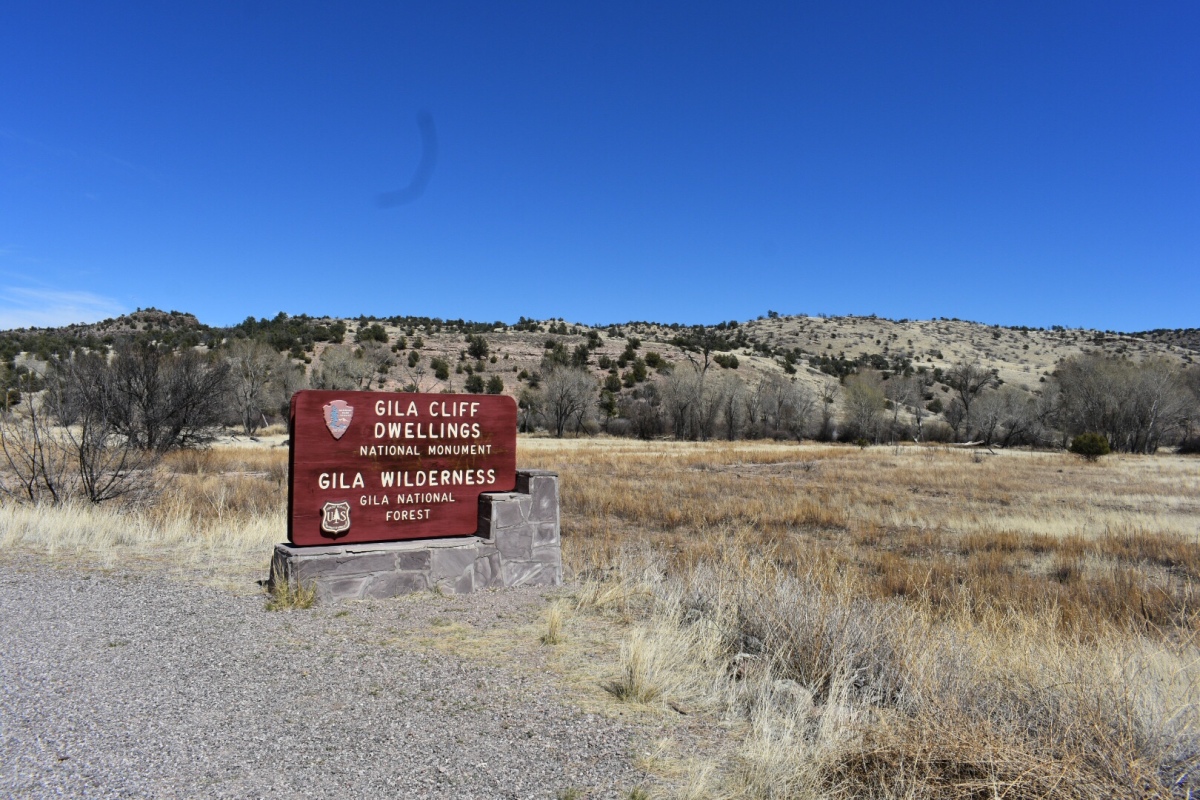 Decoy for a Dognapper is an episode of Scooby Doo: Where Are You set in the american west with one of the main locations being a Native American cliff dwelling based on the Gila Cliff Dwellings and the Mesa Verde Cliff Dwellings. As a kid I loved Scooby Doo and probably watched that episode a million times so you could imagine how excited I was to visit the South Western New Mexican cliff dwellings I had burned in my brain as a kid.

The hike begins from a gravel parking lot where a park ranger warned us of the park’s large pack rat population and to be sure to practice Leave No Trace principles. After hearing his small speech we crossed the bridge over the creek that starts the trail off. On the other side of the bridge some old lady told us she had to turn around because the cliffs were too steep (I never felt like it was that dangerous but there is a steep ladder to climb down). 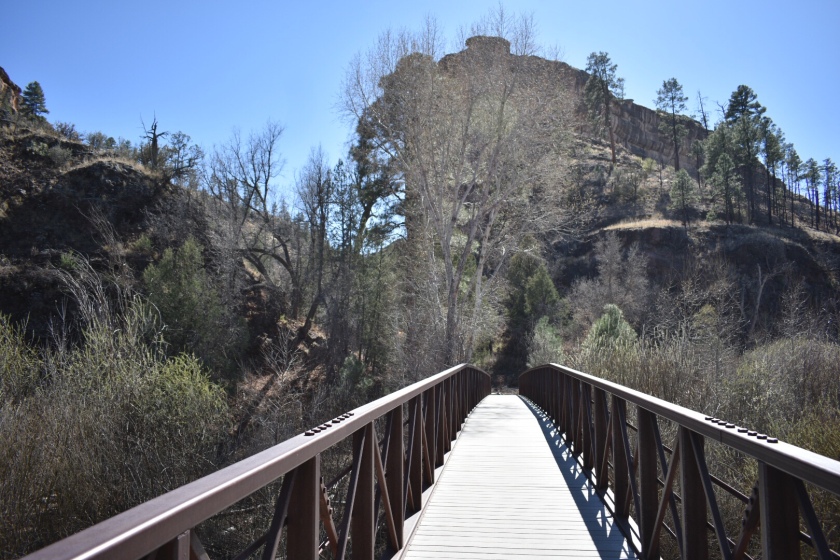 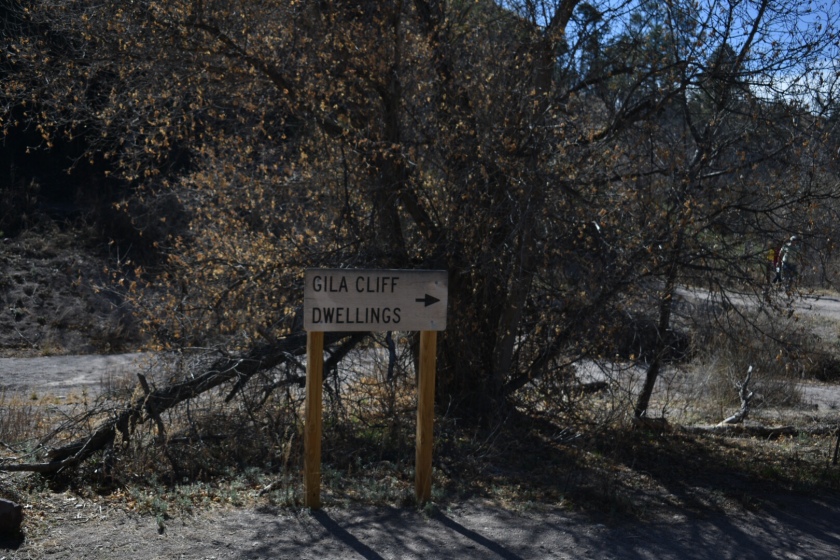 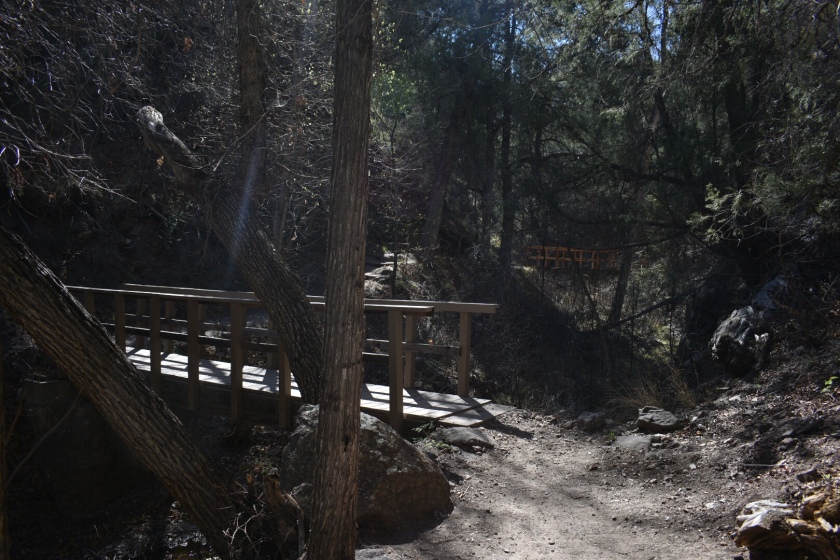 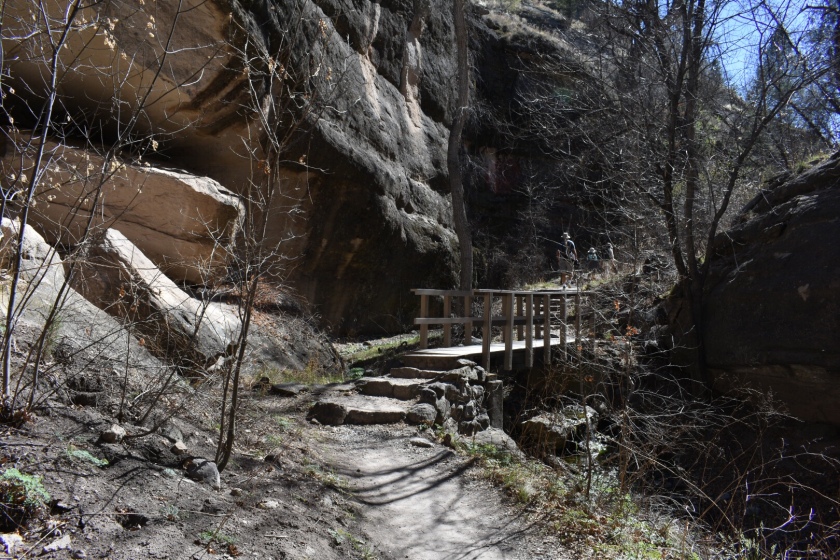 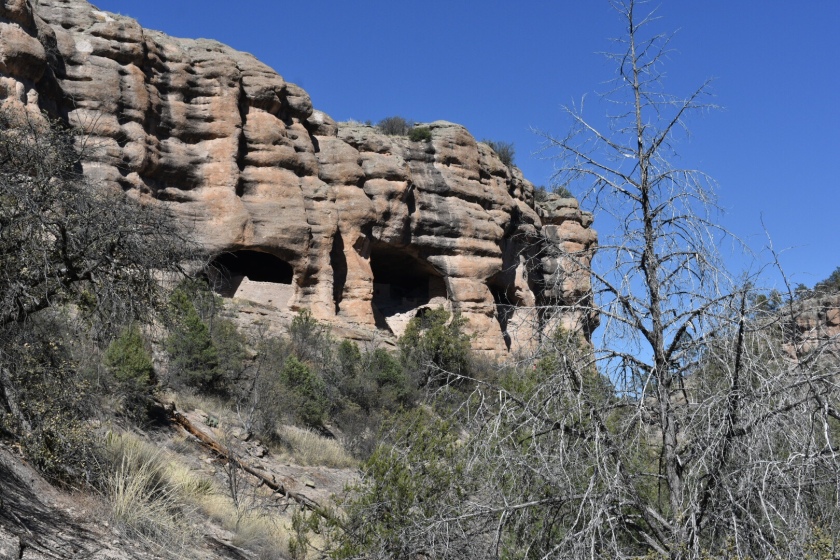 The trail climbs steeply and make a right turn making you level with and facing the dwellings. The narrow trails took us to the base of the cliff dwellings where another park ranger was answering question and telling everyone to be careful. 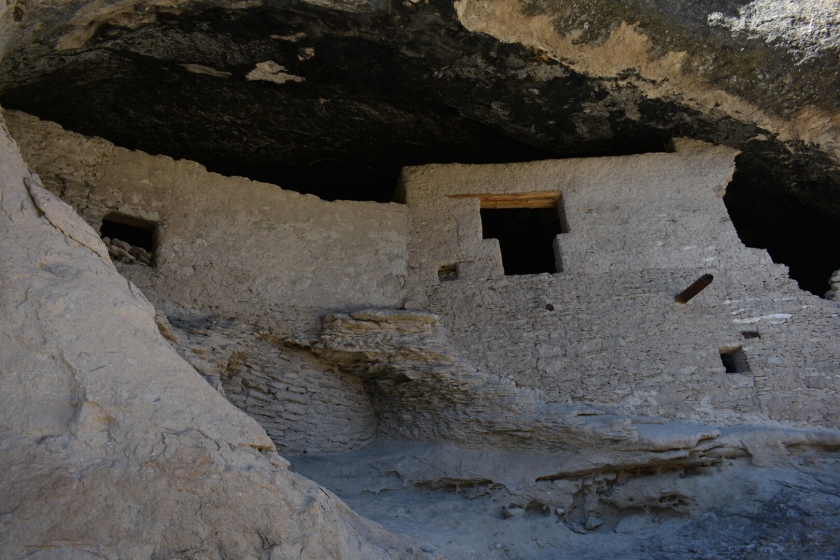 Unlike Mesa Verde you can still go into the dwellings in the Gila and I take every chance I take to pretend I’m Scooby Doo infiltrating a dognapper ring so I climbed up the stairs into the cool and dark cave. 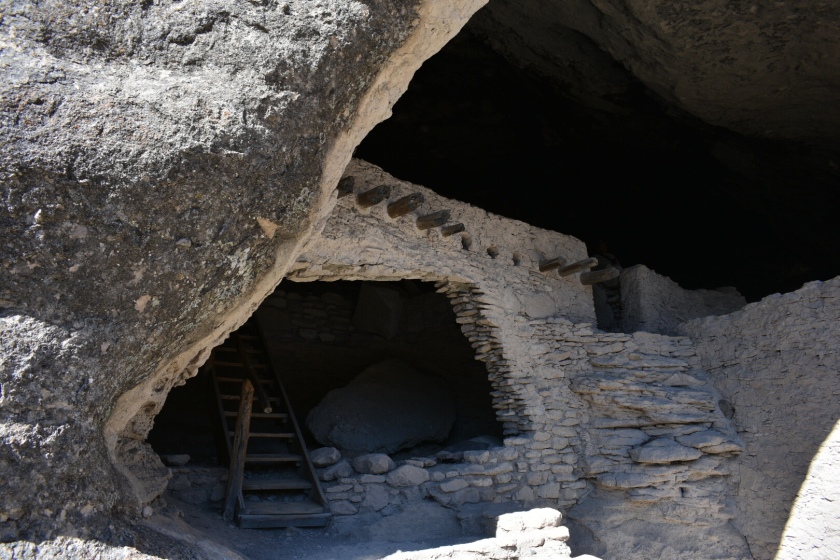 The inside was empty and all that was left inside were rocks and dust. It would be fascinating to go back in time and see what the Gila Cliff Dwellings were like during their 20 year inhabitation. 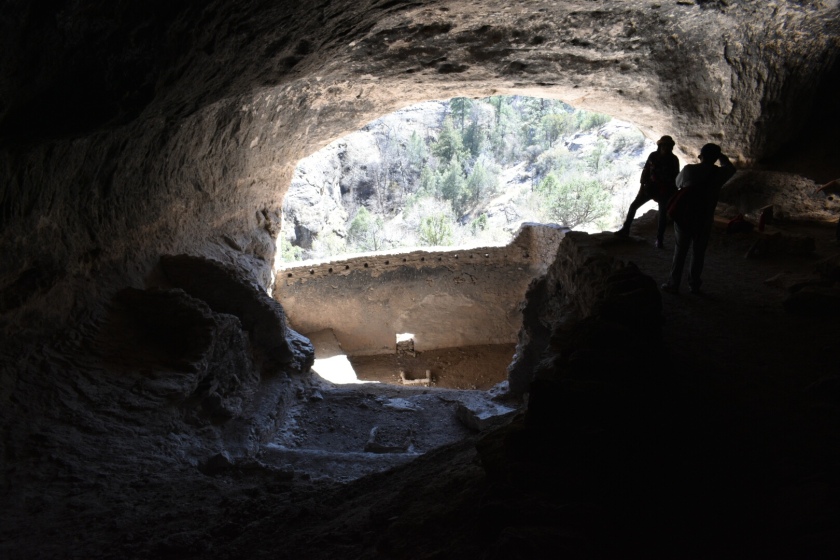 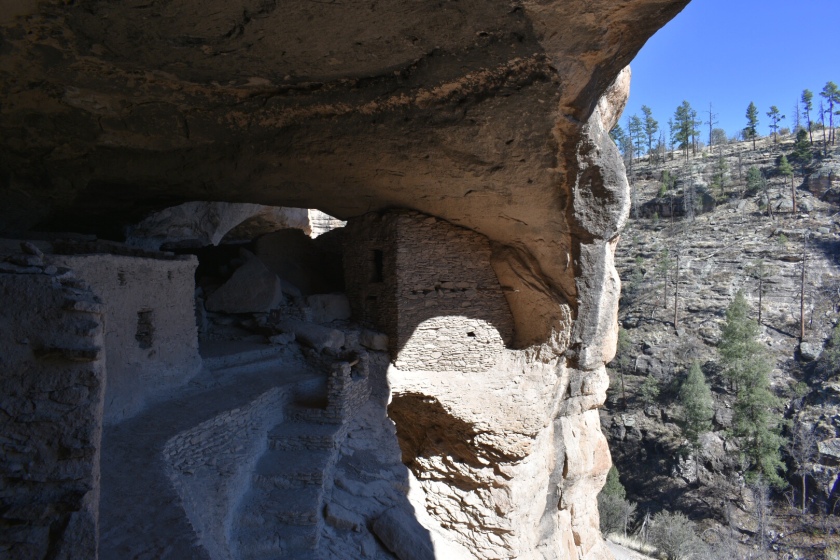 After exploring the dwellings we climbed down a large wooden ladder and down to the cliff side again.

From here the trail took us downwards and around the side of the dwellings where there were many charred trees from a past forest fire. The trail goes down and back to the bridge where it all began.

At just one mile this loop trail is an easy and fun way to explore humanities past in the Gila National Forest. I look forward to my next trip here and would encourage anyone to check out Gila Cliff Dwellings National Monument! 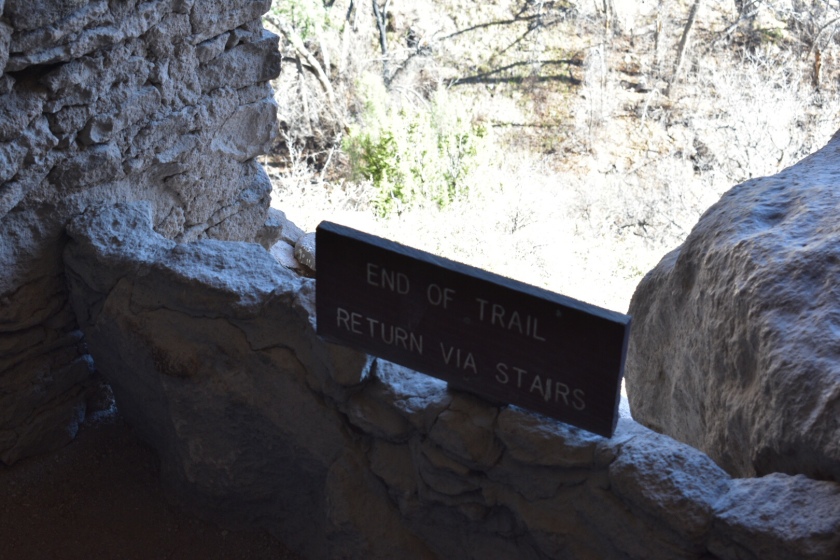 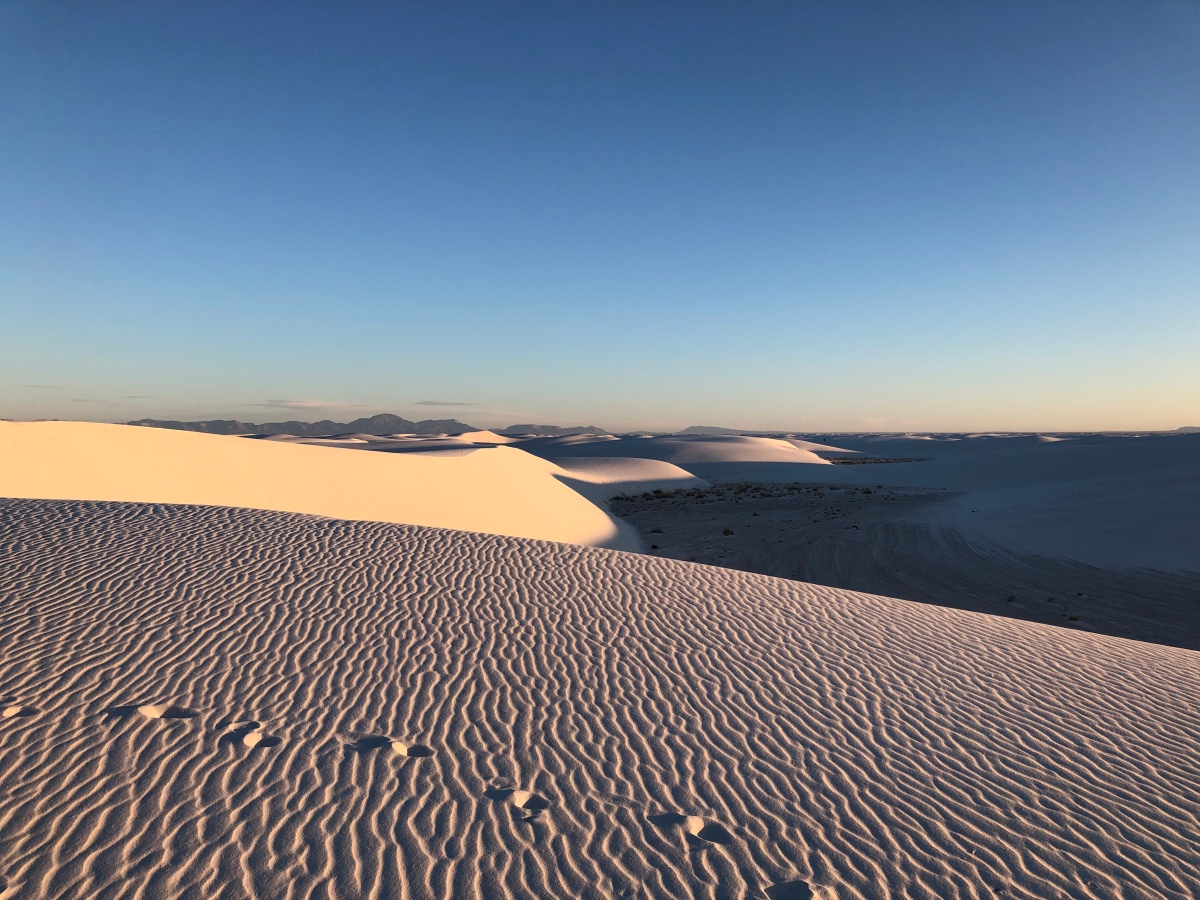 These pictures were all taken just after waking up from sleeping in the backcountry of White Sands National Monument. The morning light on the sand dunes is beautiful and something I could stare at every morning! From even the small ripples created by the wind to the large mountains in the distance, every bit of this area is stunning!

The Dune Life Nature Trail is located in White Sands National Monument in southern New Mexico along the Dunes Drive road. It is one of the first trails you will pass along the road. There are signs along the trail with an informative cartoon fox that talks about how the desert comes alive at night and the various animals and plants living in this environment. These signs are geared towards kids but are still a useful tool for adults to learn about their surroundings. 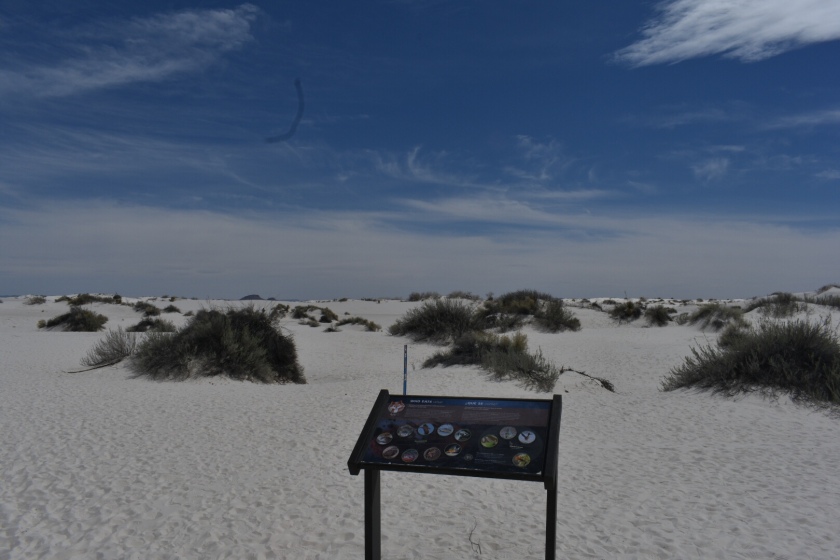 The hike is a short mile loop through the desert. It begins with a steep climb up a sand dune with loose footing and then takes you through a small area where the trail climbs up and down some dunes, passes some cool dead trees that would make Thomas Cole drool, and through a very grassy area between two dunes. Then the trail walks along the top of a sand dune before returning to the steep sandy hill and back to the parking lot! 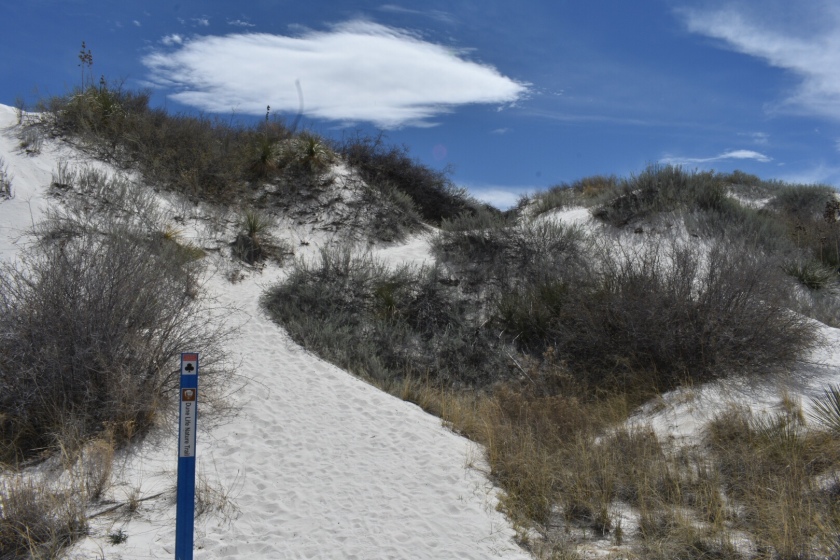 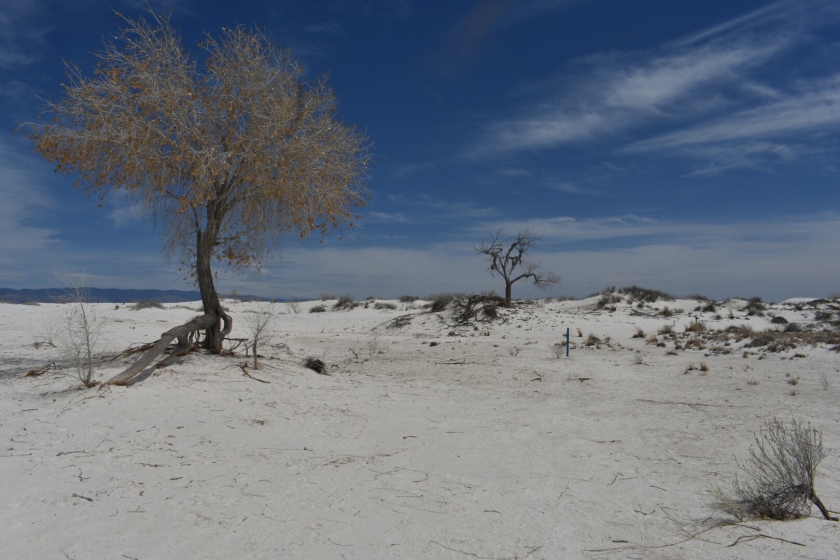 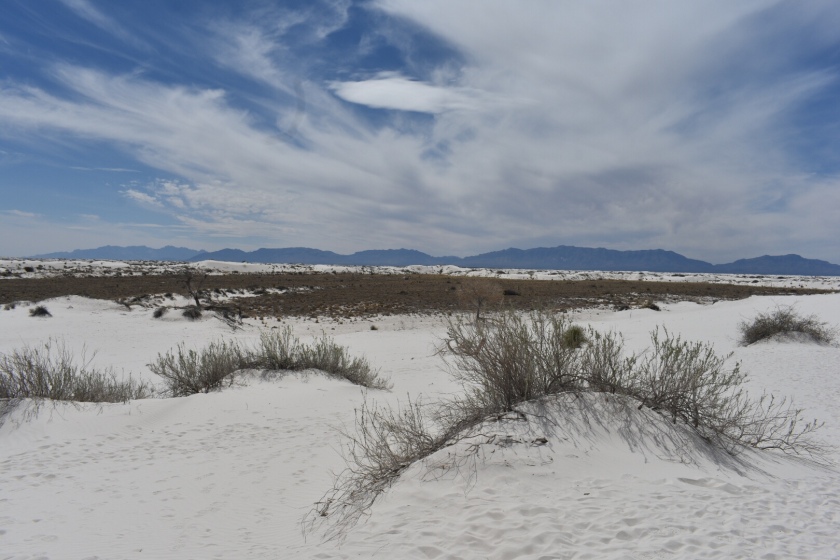 This was the first trail I hiked in White Sands and most of what I remember is how beautiful it was! The sand really is white as snow and the dunes roll gracefully into the distance before being interrupted by the high rocky peaks at the other end of the dune field. White Sands is a place that has to be visited and experienced to really understand the beauty there! Pictures just don’t do it justice. I encourage everyone to make the trip down to White Sands National Monument and to spend a day dune sledding, hiking, and taking in the beauty of creation! Just make sure you drink plenty of water because even if it’s a good temp, the sand reflects the sun so it feels like there are two suns hitting you and with no shade you can get dehydrated easily and quickly! So be careful and stay hydrated but have fun!

I took these pictures from Petroglyph National Monument on back to back nights in late March. I like these pictures not only because they show the beauty of my favorite state, New Mexico but also because it shows how every day has new and different things to experience. The first night my focus was on the mountains and the city but the next night the moon crept above the Sandia Crest four times the size of the previous night and my focus was changed just to try to capture the New Mexico moon. With all that being said I hope this encourages you to get out and explore the nature around you because even if you visit the same place every day there are new experiences to have in nature! 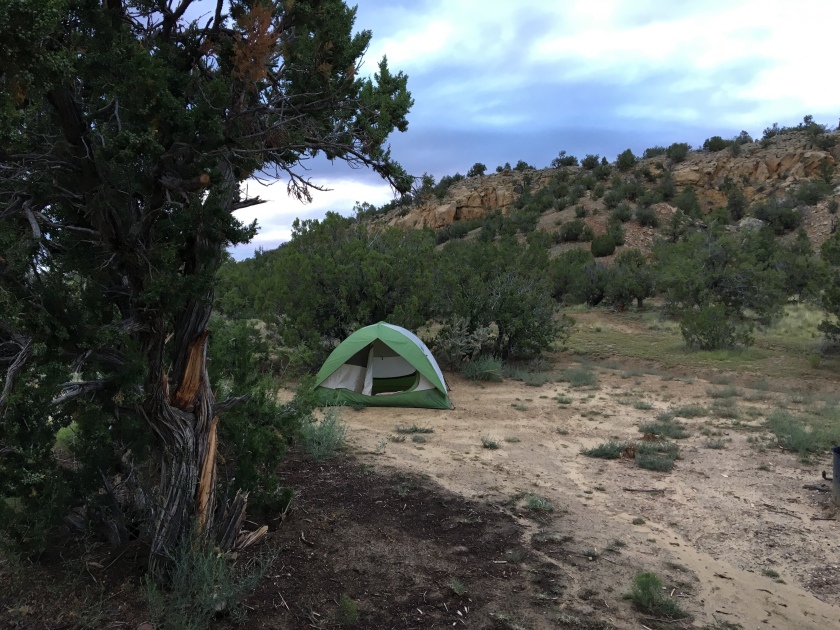 El Malpais is an area about an hour west of Albuquerque, New Mexico on I-40. El Malpais is made up of a National Monument run buy the National Park Service and a National Conservation Area run by the Bureau of Land Management. Backcountry camping is allowed in some remote parts of the National Monument but the only campground is the Joe Skeen Campground in the National Conservation Area (you don’t really notice the difference between the NPS and BLM land, it’s all the same pretty desert terrain). The Joe Skeen Campground has ten sites with a fire pit and covered picnic table at each one. There are also pit toilets in the campground. Despite being described as “primitive” (because there is no running water). This campground is well maintained and very clean. It sits below a large cliff with views that span the entire area if you are brave enough to climb up. This campground is also typically empty. We stayed here 4th of July weekend and there was one other person camping. The dirt road of off NM117 that leads to the campground is short but has a dip in the road that would be difficult for small cars to traverse if it was flooded. I have driven it in a Jeep Wrangler and a Honda Accord and neither had issues. This campground is awesome and is one of my favorite campgrounds to stay in. Partly because El Malpais is one of my favorite places ever and it is in my favorite state but it’s also just a great little desert campground. Camping at the Joe Skeen Campground will cost you the hefty price of zero dollars.

This picture was taken at night but ended up looking like an old film picture. You can kind of see some stars in the top left corner.