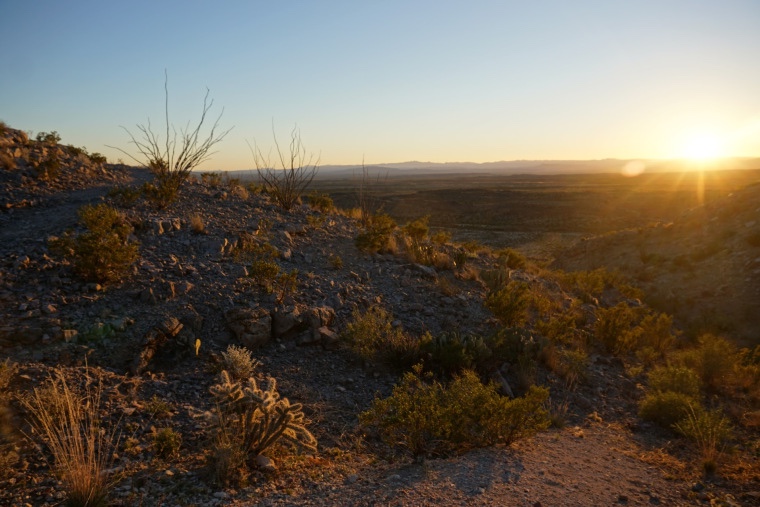 Long before Texas’ Big Bend country was made into a national park it was populated by a handful of small ranches. In 1900 Martin Solis discovered cinnabar near his farm and quickly tried to capitalize on it. Mining continued here sporadically until the creation of Big Bend National Park in 1944. The mine was fairly unprofitable in it’s day but has become a benefit to all future generation as a protected historical site. It is now an eerie reminder of the past in the heart of Big Bend’s backcountry.

We visited the derelict mining town after a long day of exploring backroads and canyons on the park’s east side. From the Rio Grande Village area we took the River Road East towards the center of the park. We set up camp at the Fresno backcountry site (the only place you can camp near Mariscal Mine) around 5:30pm and as the sun was setting we rushed to explore the mine.

At this point I will say that purchasing the Guide to Big Bend’s Dirt Roads book from any of the camp stores of visitors centers in the park. This book is a well of information for all the parks roads and it has a nice map of the Mariscal Mine complex telling you what each building is and what it was used for.

The hike begins in a small dirt parking area with rock houses scattered around where the former miners once lived. There is a sign at the trailhead with a warning not to touch anything because of the mercury that has soaked into the bricks. Up on the hill we could see the mine blending in with its surroundings as it is made of rock from the hill it sits on. The trail up to the mine is loose and rocky dirt so we had to be careful not to slip while trying to take pictures and hike at the same time. The largest structure in front is one of the many furnaces used to melt down the mercury containing cinnabar ore.

The trail curves past the large furnace and gains some elevation to get a view of the complex from above and to see the mines themselves. Large deep and dark pits with metal grates blocking entrance. some went like a doorway into the mountainside and some were just a hole in the ground dropping vertically  to the center of the earth (or close to it at least). The only other people out there, some kids and two adults with them were dropping rocks and sticks into the largest mine shaft and counting before it hit the bottom.

We reached the end of the trail at a high point overlooking the mine with great views of Boquillas Canyon and the east side of the park as well as the setting sun and west side of the park. After enjoying the view for a bit we started to head back down, peeking in the mines along the way. 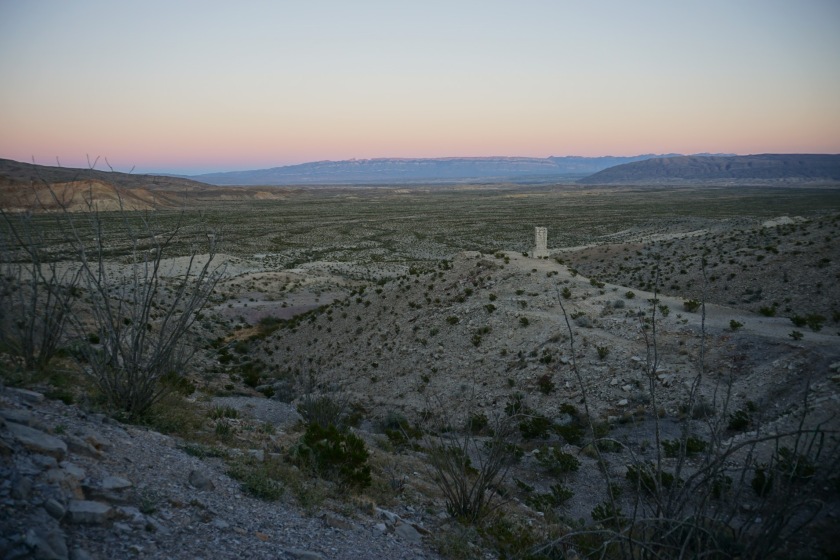 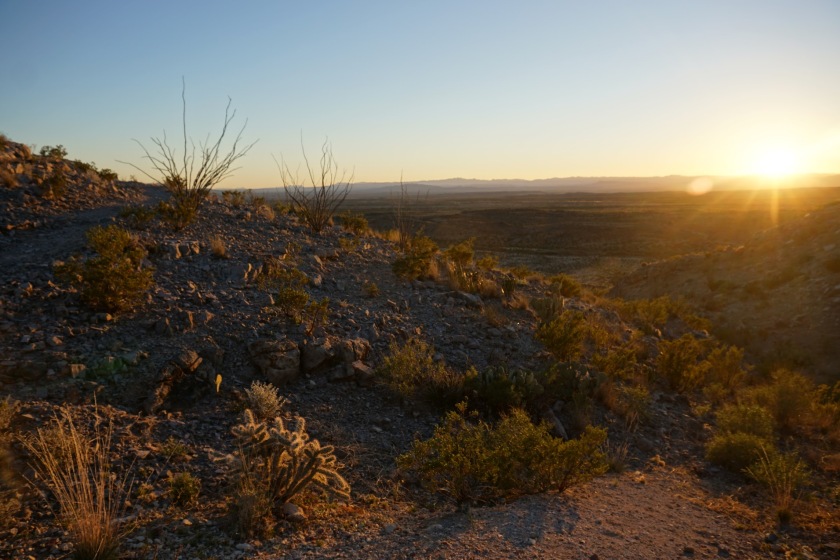 We spent about an hour hiking and exploring the Mariscal Mine area with the trail being about 2 miles out and back. The mine is in the middle of nowhere and takes an hour to drive to but it is well worth the trip! 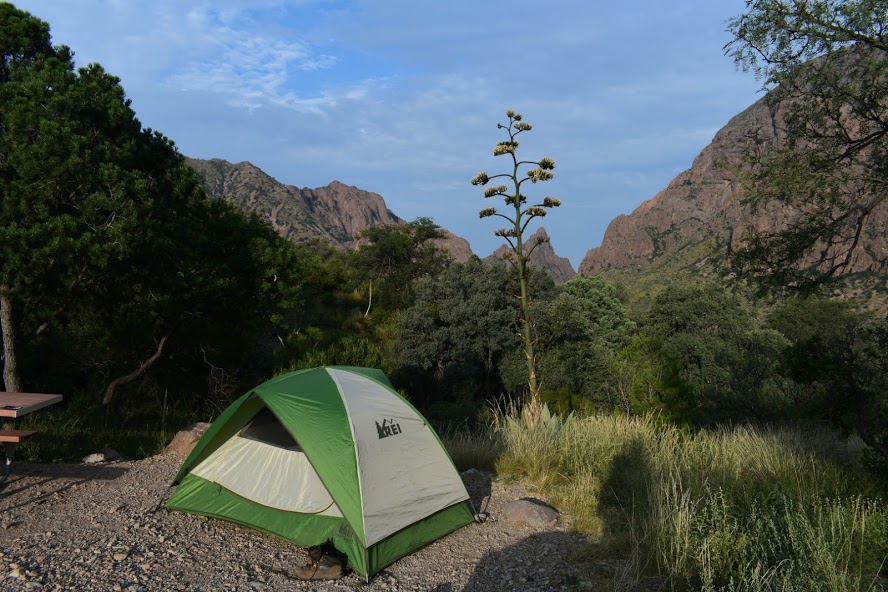 The Chisos Basin Campground is one of three frontcountry campgrounds in Big Bend National Park. There are 60 campsites (26 are reservable online), restrooms, and water. The campground is a well maintained typical National Park campground. All sites are $14 and don’t have RV hooks ups. It is a short but steep walk up to the park lodge, visitor center, and camp store where you can find all the snacks, equipment, souvenirs, and information you can handle. What really makes the campground great are the views! Most sites have a great view through “The Window” looking down to the desert below and on the other side you have the steep cliffs of the Chisos Mountains rising 2,000 feet above you. Overall this is the perfect frontcountry campground to me being small, having restrooms, immediate access to trails, great views, and fairly inexpensive! 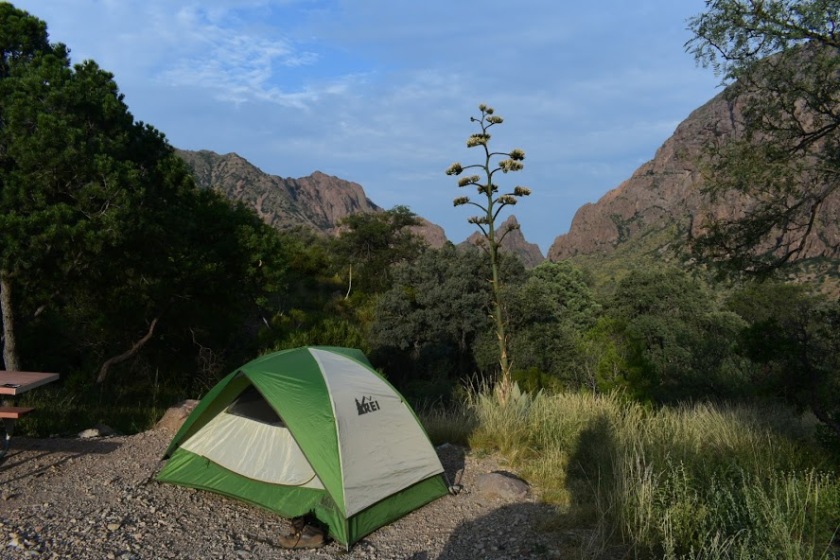 My tent with the Window behind

Making coffee with a Butte

Sunset behind the Window

P.S. Thanks to Big Bend being a Dark Sky Park you can see the stars extremely well from anywhere in the park including the Chisos Basin despite its close proximity to the lodge. So if you catch a clear night you will be enjoying the stars from your Chisos Basin campground! 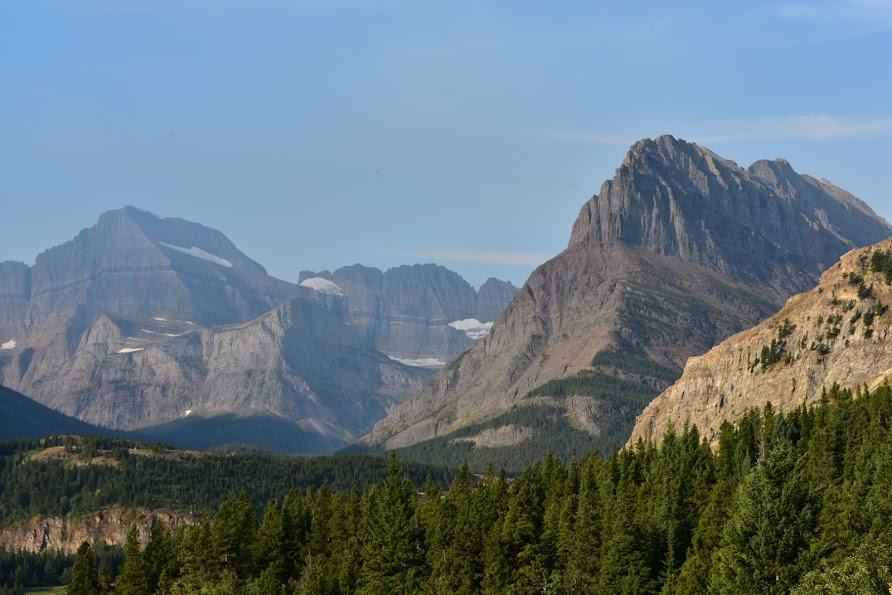 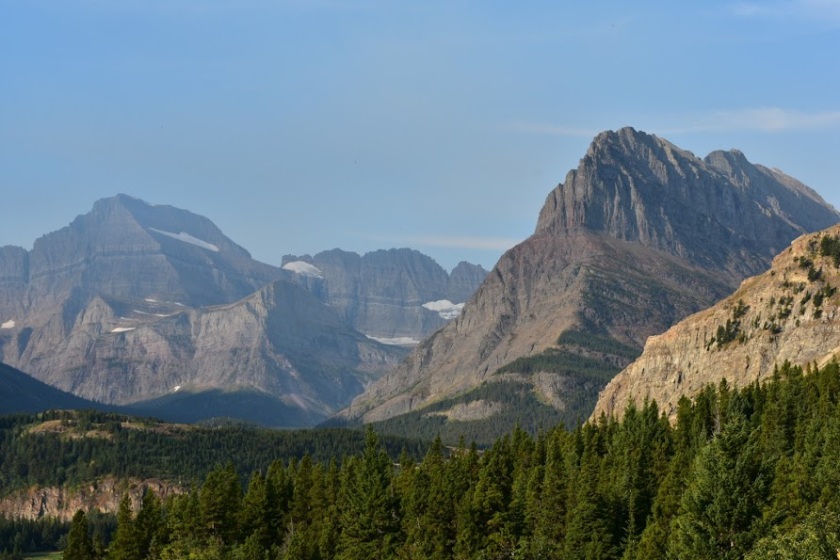 I took this picture from the Apikuni Falls trail in Glacier National Park. The wall of mountains creates the Continental Divide, with all the water falling on our side of the mountains draining to the Atlantic Ocean and on the other side’s water to the Pacific Ocean. We had been on top of those mountains the day before, peeking over at the glaciers below us. Glacier National Park is one of the most beautiful places I have been to and I cannot wait until I can return and explore the mountains some more!

Between Badwater Basin and the Devil’s Golf Course in Death Valley national park there is a short gravel road that will take you up to the Natural Bridge Trailhead. A short one mile trail that can be extended a half mile on the end to wander up the canyon a little more. We parked our rental car at the trailhead, grabbed our water and snacks and headed up the trail. Just like everything leaving from Badwater Basin, the trail takes you up pretty much the whole time but at a very slight angle. The trail had once been paved but little remains of the path due to a flash flood at some point in history. The trail is all gravel and at some of the steeper points a little harder to make your way up but it’s still a very easy trail. Probably .75miles in you will reach the trail’s namesake feature: the Natural Bridge.

Looking plucked straight out of southern Utah, the hefty chunk of rock reaches from one end of the canyon to the other. We were quite impressed by the arch as we passed under it like a gateway to the rest of the canyon. After the Natural Bridge the canyon has a large rounded area where Anya and I sat down to eat our apricot clif bars (the best flavor ever). While we snacked, Dad checked out a nook in the rocks that seemed perfectly round and you could store a giant pencil in it if you had one. After that we met a very friendly couple from Sacramento that had done much of the same road trips as us and had even visited the little train museum by our house. After chatting we carried on to the end of the trail where there had once been a waterfall but was now a slick rock slide. We climbed up it and scrambled around the canyon for a little more before heading back to the car. Dad tested the former waterfall’s slideability and we figured out it worked a little too well! We were back at the car in no time thanks to the trail’s short length and ready to explore the rest of the park. If you’re in Death Valley for a short time or for a long trip make sure to check out the Natural Bridge trail! Also bring water along with you even though it is a short hike because Death Valley has that name for a reason!

Thanks for reading! – Josh