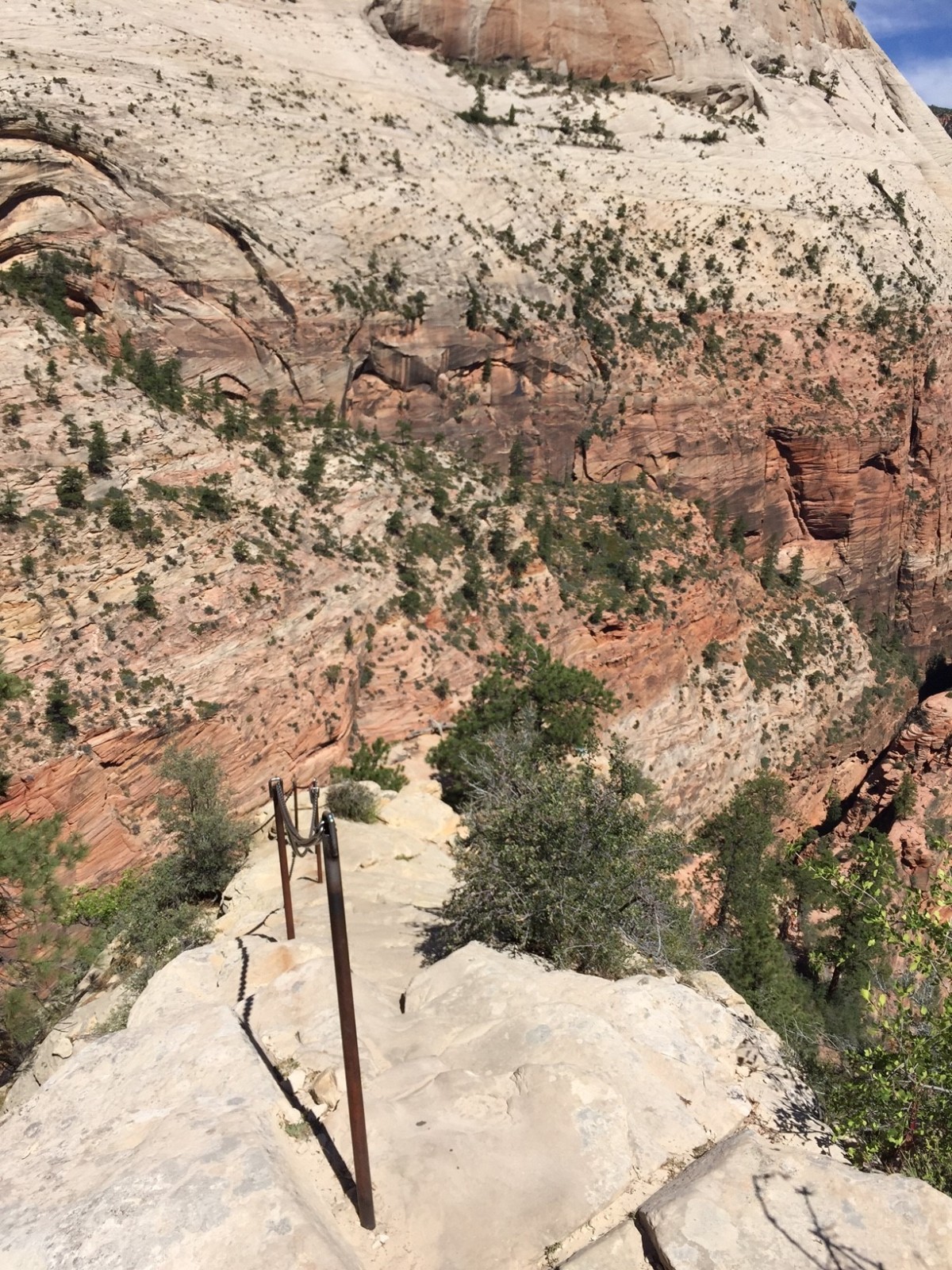 Angels Landing is universally agreed to be one of the iconic day hikes in North America.   It is about 5 miles round trip with about 1500 feet in elevation change.     I hiked this several of my children last summer.   I wasn’t real sure if I wanted to do the last length because of my fear of heights, but I succumbed to peer pressure at the top and decided to give it a shot.

To get to Angels Landing in Zion National Park in southwest Utah, you can take the bus from the visitors center.   It starts right at the Grotto bus stop.    The incline is slight to begin, but quickly ramps up and after crossing through a shaded break in the canyon wall concludes with a series of severe switchbacks known as Walter’s Wiggles.   After the Wiggles, you are at a resting area 1500 feet above the canyon floor and about a ¼ mile from the turnaround point of Angel’s Landing.   This last ¼ mile is about 2 to 6 feet wide on a rock spire with steep drop offs on both sides.

Now my oldest son Josh, had outpaced myself and my daughter and was somewhere out on the rock spire.   My fear for his safety was overridden by my own fear of heights.   The first section veers to the right and is on an angle which gives the feeling that you will slide right off the side and down to your death.   There are chains to hold on to and hold on I did.   I had my daughter stay about six feet behind me because I knew if I could see her then my fear would grow exponentially.   Plus, she could keep anyone from shaking the chain that I was clutching tightly.   As we continued through the narrow ledges and over rocks, I basically spider crawled and hugged the rock and chain.   I doubt I ever once stood straight up.   Josh passed us on his way back as we were about halfway to the conclusion of the rock spire.   Somehow I climbed, crawled, and squirmed my way to the top and I must admit the feeling of elation from not plunging to my death accrued with the beautiful views and blue skies was intense.

After soaking in the views, we turned back and the return trip was surprisingly easier.   I could see that several of the places that were so frightening on the way out on the spire, were actually not so bad.   Now, I still hugged the rock and clutched the chains tightly just in case of course.   After spider crawling the ¼ mile back we then hoofed it back down the trail as quickly as possible.   This was mostly because we had drank all our water and were getting really thirsty quickly.

Once we got to the bottom, I noticed that my right shoulder was a little sore but didn’t think much of it.  However, the next day when I woke it was hurting really bad and when I went to take a breath I had pain in my upper right lung.   It was a sharp pain and it kind of scared me.   I called my Dad (retired respiratory therapist) and explained my symptoms and he diagnosed me with a pulled muscle of some sort in my shoulder area.   I think I may have set some sort of hiking achievement by being the first person to pull a shoulder muscle while hiking.   I guess I really was clutching that chain.

I do recommend the hike and I probably would do it again.   The views really were amazing and the sense of accomplishment was astonishing.   I apologize for the pictures not being that great.  I was so scared I really didn’t take any during the scarier parts.   I do recommend going first thing in the morning as it gets crowded later in the day and in the summer the rock gets super hot which is uncomfortable when you are hugging it tightly.