I visited Saguaro National Park for the first time a few years ago and loved it! I visited the west side of the park (or Tucson Mountain District) for the first time in April this year. Saguaro is unique among the National Parks because of its proximity to a fairly large city. The Park is cut in half by the city of Tucson and each side has its own special features. On the east side (or Rincon Mountain District) the park’s namesake cactus that only grows naturally in southern Arizona and Northern Mexico are older and larger (meaning they are often 100+ years old and can reach astounding heights close to 50 feet tall). In contrast the west side’s Saguaros are younger but more densely populated. The east side also provides the opportunity for backcountry camping along the Tanque Verde Trail in the Rincon Mountains. While the west side doesn’t have backcountry camping it does boast the highest peak in Saguaro National Park, Wasson Peak at 4,687 feet above sea level.

So out of desire for great views and a great hike Erin and I set off in the early afternoon to take on the 7.8 mile hike up to the peak and back with 1,800 feet in elevation gain. Before setting off we decided it would be smart to ask a ranger for the best route since there are many intermingling trails in the park that can take you up to the top. The park ranger said he thought it would be best to hike up the King Canyon Trail and back down via the Gould Mine Trail. He also recommended to go up the wash that runs parallel to the first section of trail because the terrain is a bit easier to traverse and there would be more shade. We thought that all made since so we headed out towards the trailhead excited for our hike! I quickly filled my water bottle up and above the water fountain I noticed a sign warning of “Africanized Killer Bees” in the park. It warned how painful their sting is (though not really deadly) and that if you disturb them they will chase you for up to a quarter mile. I showed Erin and we both agreed that we didn’t want to run into any killer bees.

Finally at the trailhead we started our hike from the King Canyon Trailhead. You can either go straight and up along the old jeep road paved with loose gravel or you can go left and down into the wash that has nice rocky footing and more shade from the Arizona sun. I recommend the former and here is why. We went in the wash just as Mr Ranger Man has suggested and it was all great and dandy. Their were lots of Saguaros to take pictures of along with the blooming ocotillo and lizards galore hopping about. 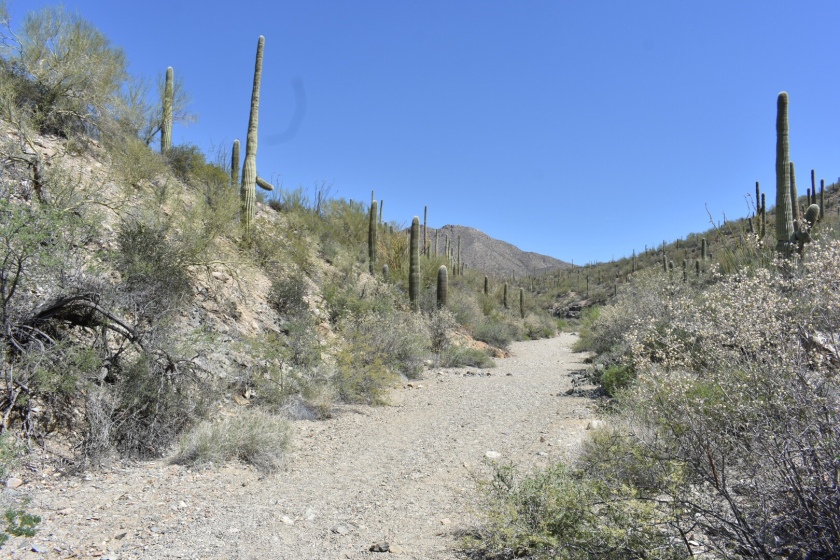 We hiked for about half a mile and then the trail began gaining elevation via a slight incline but mostly through small cliffs that we climbed up with ease while picturing the waterfalls that form here when large rains fall.

In the next quarter mile we encountered a couple more of these small ledges before coming to the largest one that was a little taller than me. I began climbing up and as I poked my head up above the top my ears were filled with the buzzing of bees and my eyes took in the terrifying sight of a hundred killer bees that had taken up residence right in the middle of our wash. Without much thought I hopped down from the cliff and we started back to take the jeep road. Luckily the bees were busy bees and didn’t pay us much mind but we didn’t want to risk trying to go around the bees since it felt like the permeated the entire airspace above the trail. And so we hiked back 3/4 of a mile cursing that ranger for sending us into the hornets nest. 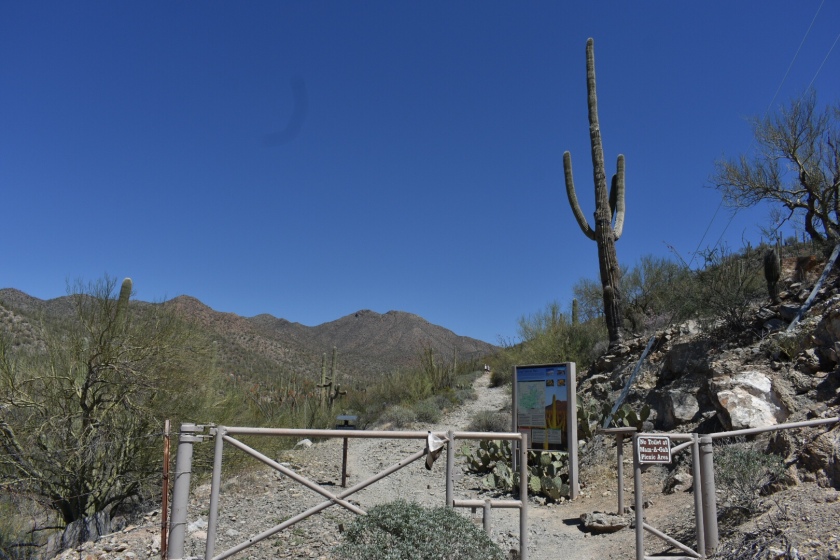 By the time we returned to the trailhead the sun was right overhead and gave us a typical springtime temp of 90°F with no wind chill. The jeep trail gained elevation much steadier than the wash and we quickly were treated to great views of the desert and mountains behind us and our mountain top destination in front. 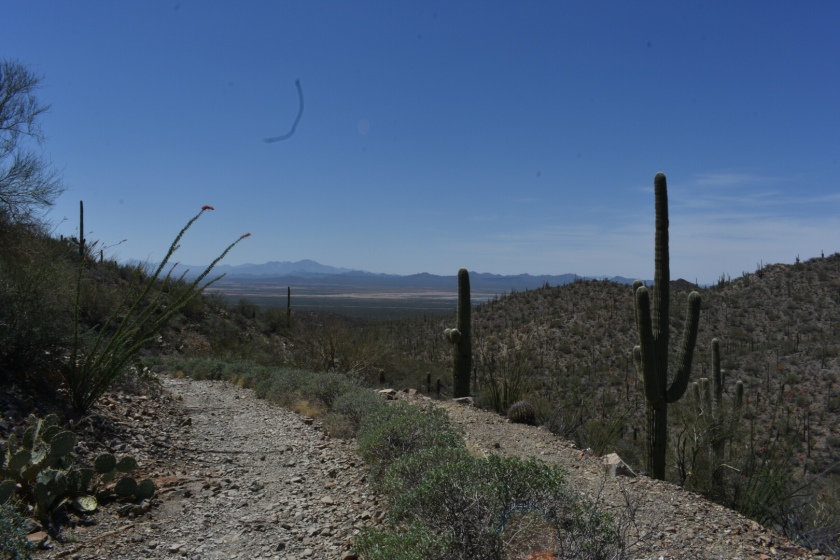 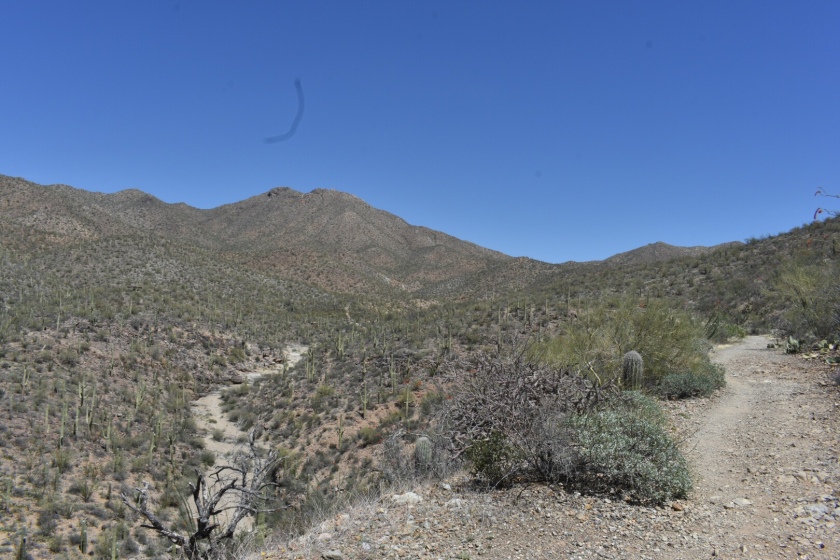 Pretty soon we had finished the first mile of trail (not including the wash detour) and were at the first of many crossroads. To the left you could go to the hike-in picnic ground and connect to the Gould Mine trail (where we would later descend) or continue straight and upwards to Wasson Peak.

That is what we did and with most of our elevation gain ahead in the next 2.5 miles. As the trail steepened the view widened and the sun beat down harder on us. In the most strenuous parts of the trail with no shade whatsoever we would use the thin shadows of the Saguaro to hide from the suns insidious rays. (I say “we” but I really mean Erin did that while I poked fun at her even though I knew it was a brilliant plan). Anyways we kept on upwards while the sun shone down and we cherished every time the occasional breeze would blow by to keep us going.

After another 1.5 miles we created a ridge that then gave way to our first views of Tucson and the eastern mountains. The view to the west was great too and we took a moment to take it in. Here we met our second crossroads with a right turn on the Sweetwater trail that goes around Wasson Peak and meets with the northern end of the park and a left turn leading to our summit.

Soon after the left turn we crossed over a fallen Saguaro in the trail that seemed like before its downfall was one of the larger cactus around.

After a horseshoe of a turn in the trail and before the next we spotted a fenced of area to the right and went to investigate! The fence blocked off entrance to a cave where miners once dug for iron. With rusted iron bars obstructing the deep blackness of the cave it made me think two things, one being that I wish we could take advantage of this cave’s shade and secondly that somewhere in that blackness could be the den of a cougar which I shuddered at the thought of and decided to continue on hiking.

After another mile from our last split we reached the third crossroads. A left turn which began descending back to the parking lot and a right going another third of a mile to the top.

The homestretch was upon us and forgetting the heat we rushed to the top and were treated to 360° views of the beautiful Arizonan landscape. There are many reasons why I love the desert and a big reason is it’s lack of obstructions. In our home state of Georgia we are at all times surrounded by forest and even atop our highest mountains the trees cloud the earth below (not to say it isn’t pretty. I love Georgia’s mountains). Out West in the desert though the landscape rolls out and unfolds forever only interrupted by large mountains or the limited sight distance of the human eye. Sadly though no matter how many carrots a human eats their eyes reach a limit and there’s no way around it. There is a way around the mountains though and that is to climb them. From atop a mountain in the desert the earth shows its form and what looked like a hill or a ditch from the bottom becomes a part of a landscape that no man could create that despite being dirt and rock comes alive and fills me with excitement and awe. 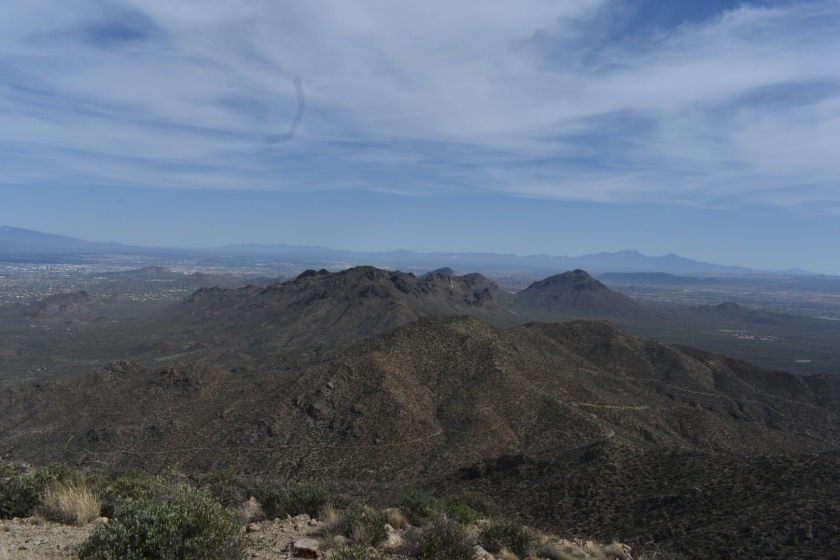 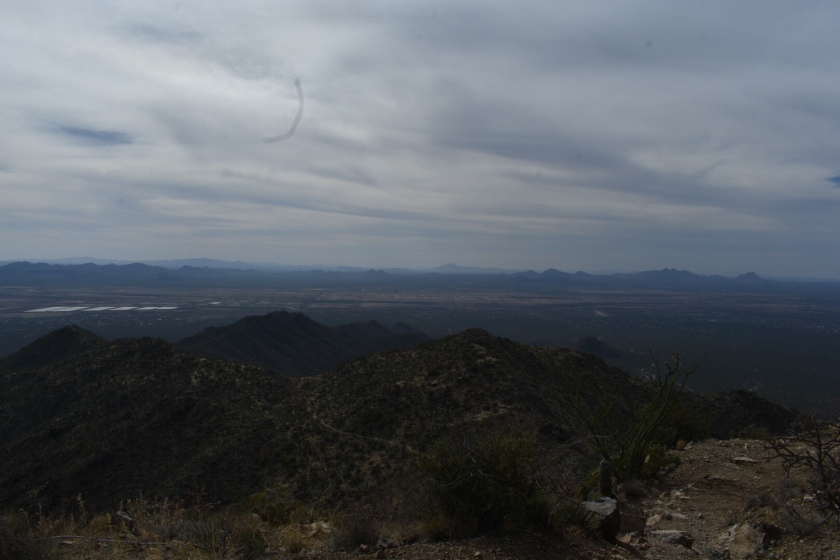 Anyways after taking all that in it was time to start back on our 4.3 mile return trip. Back down from the mountain we went and along the rest of the trail the views were great as the sun went from it’s piercing position up above to meet the horizon. After a quick two miles of downward hiking and all around enjoyment of our surroundings we came to our next crossroads with four directions all shooting of in different directions to different corners of the park. 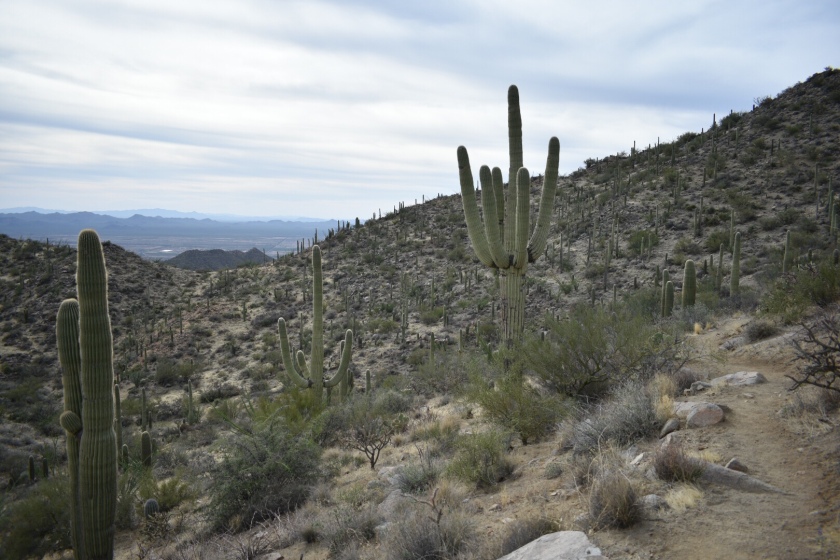 Our turn was left and so we went left to connect to the Gould Mine Trail. The crossroads sat atop a ridge and the trail went down the side and turned back east to cling to the canyons side that led us back to the trailhead. We turned a corner and noticed a deep orangey red dirt ahead that stood out greatly from the tan dirt we were used to. Turning the corner more we saw another fence and larger iron grate that covered a deep mineshaft whose bottom must have been in the earths core. I assume the redness of the dirt was either because the miners accidentally came across some artifact that cursed the land and made it red or because of the iron they were mining.

There was also an old stone miners hut here. 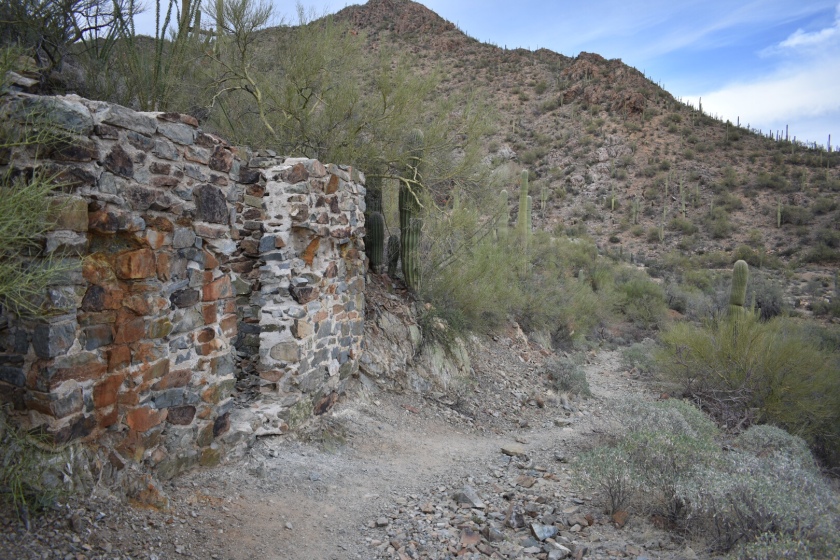 After we passed the mine we came across a lot of old rusted metal from the miners lunch boxes and tools. We passed another mine shortly after that one and kept on down the trail that now took us through the valley’s floor. The sun was setting quickly now and as the changing light gave a golden hue to the desert we were suddenly back at the parking lot after crossing the wash that we had started in so long ago. 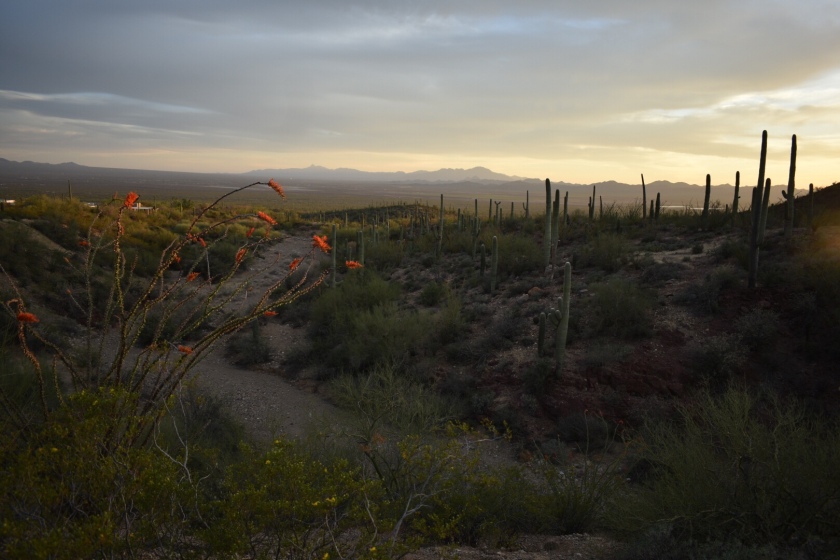 With a bit of a drive ahead of us to our next destination we made some coffee and got rolling but not before taking some pictures by the entrance to the park as a classic Saguaro sunset unfolded before our eyes.

This hike is one of my favorites and I’m very glad we hiked up to Wasson Peak and would encourage anyone else that loves a good hike and great views to do this hike as well! 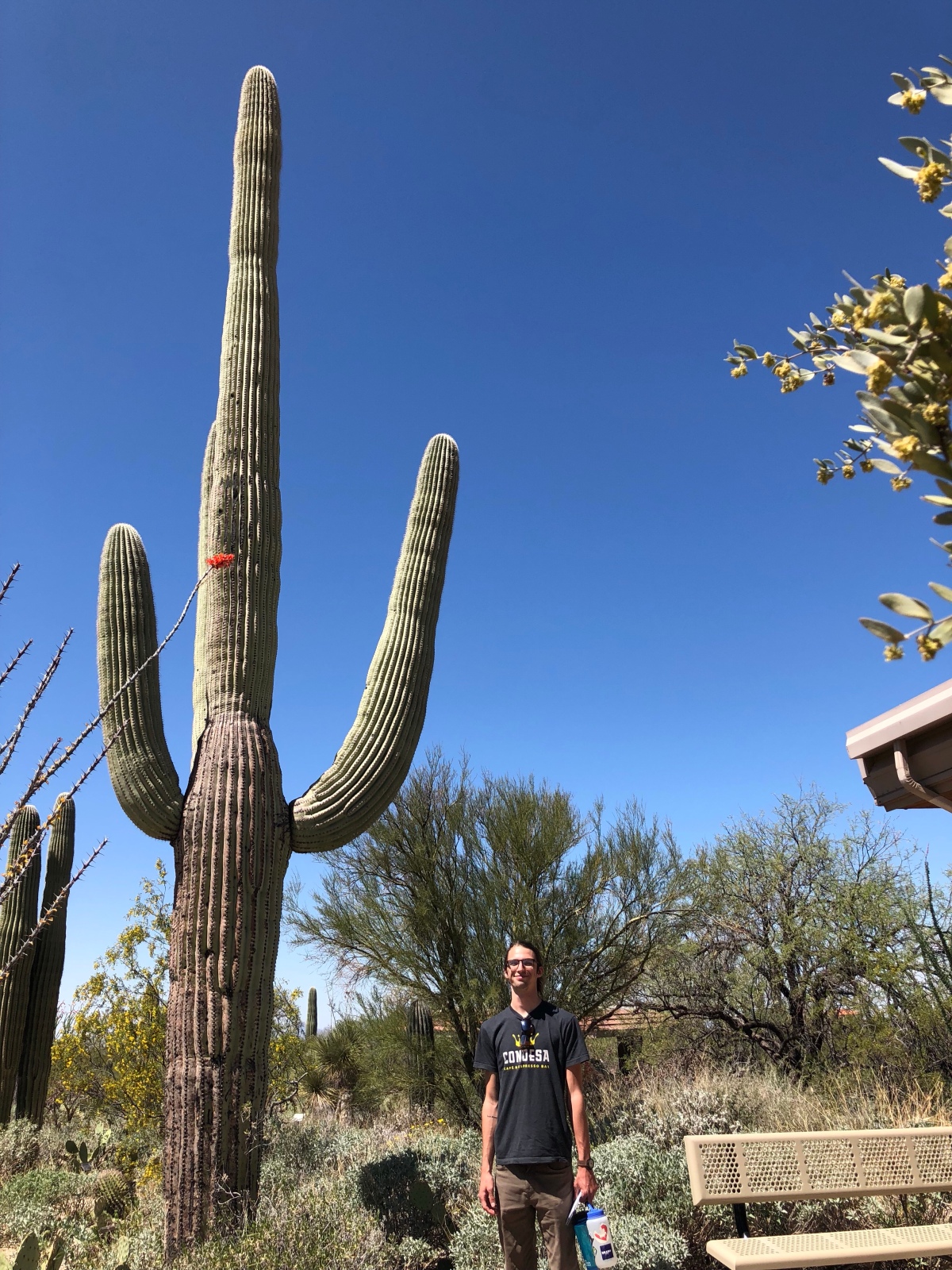 Fellow blogger, Josh, returned to Saguaro National Park this week. Unfortunately this time without yours truly, It looks like he had as nice of weather as we had 2 years ago. 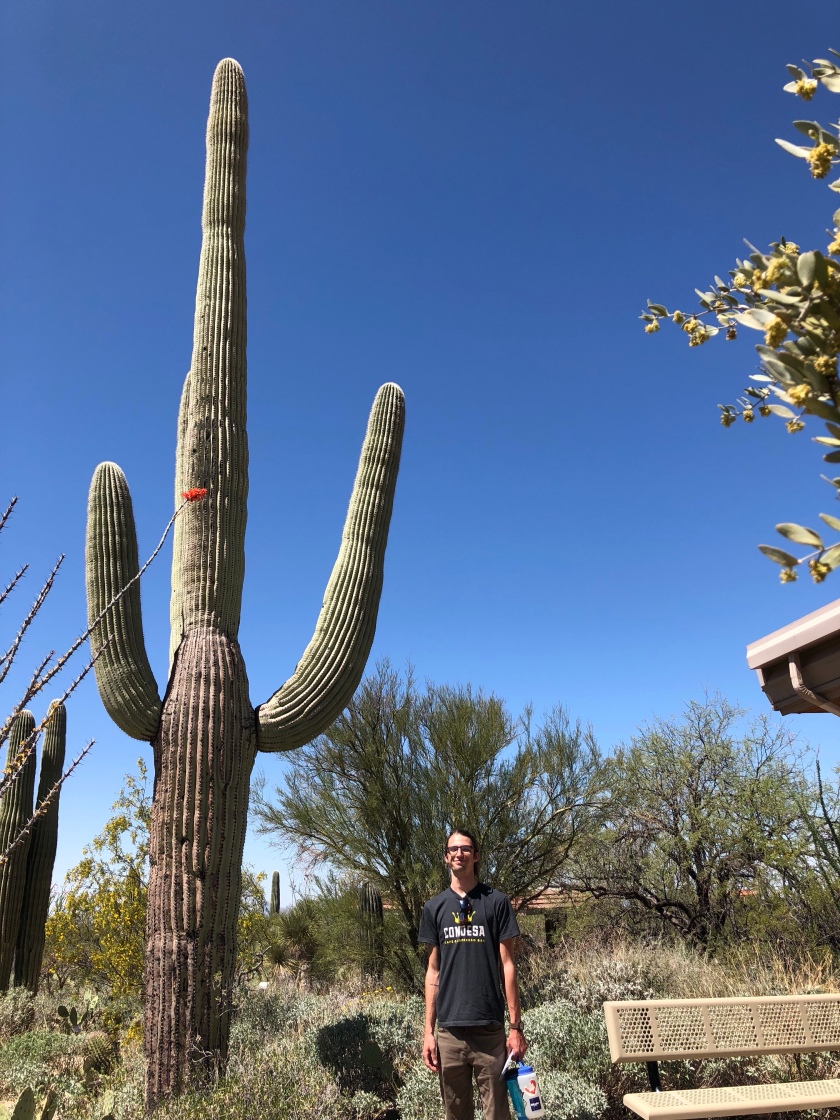 One of the best parts of traveling to new places is eating the local cuisine.   I was excited to try El Charro in Tucson AZ.   El Charro is not only the oldest continuously operating family owned Mexican restaurant in the United States, but it is an absolute must to visit if you are in Tucson.  While they are known for inventing the chimichanga, the reason I was there was to try their famous Carne Seca Platter.   Carne Seca is prepared by marinating shredded lean angus beef and drying it in the Sonoran desert sun.   It is then grilled with green chiles, tomatoes & onions.

Sun dried beef……count me in!

It was served with fresh guacamole and tortillas.   They claim Gourmet Magazine called it a “taste explosion”.   That was pretty accurate.   I made a taco with the corn tortilla, carne seca and and guacamole.   It was so flavorful and delicious.   It was the most unique Mexican food I ever had.   I definitely recommend El Charro.   Five stars for both ambiance and taste!